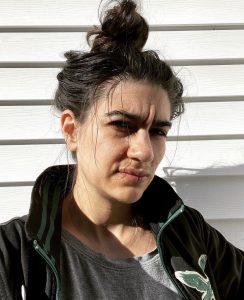 good songs to recommend for someone trying to kick

heroin & clearing the oldest iPhone I have, deleting

my past life photo by photo, stopping at the one you sent me

when you had your first baby & I was at the Kimmel

listening to a live jazz band with Alex, & your son,

he was all tubes & wrinkled, so I kept the picture

to myself. he will be three in April & it feels like he should be

some same stale drama, so I play it once, again,

but it’s all puppets

pulling on my pocket & you’re asking

for the flask & I don’t even remember telling you

that I brought one.

my dad’s dad hated the mummers.

he called them feather merchants.

let’s steal a rifle & pick off the next

& then the next planet’s moons one by one

until we’re even, until it’s simple or simple again.

I really thought we had a chance this time.

I just had that feeling—you know?

Kimberly Ann Southwick is from Cherry Hill, New Jersey and currently an Assistant Professor at Jacksonville State University. She is the founder and Editor in Chief of the literary journal Gigantic Sequins. Her full-length poetry collection, Orchid Alpha, is forthcoming from Trembling Pillow Press. Find her on twitter tweeting about being a Philadelphia Eagles fan: @kimannjosouth.