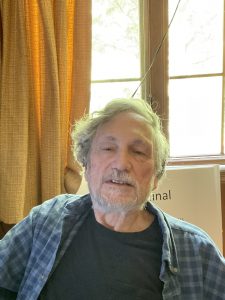 There are ten categories of competitive yodeling.

When I ask why, she purses her lips.

If it has to be said at all, she wants it yodeled.

She’s a daughter of the dotters of wisdom

and winner of the Under Twenty Hill to Hill.

Her voice carries all the way

to Lyons from Blue Mountain Motors,

where she’s bending over the hood,

leaning in, yodeling to the engine

in her polka-dot Capris,

the Jewel of Berks County,

trying to get the old Dodge tuned.

Even now, as far off as Macungie,

with very hard eyes and almost no lips,

on hearing her voice look up

and press their tongues to gums for spit,

bracing themselves for the eleventh yodel—

And when I dream I’m Paul Cezanne,

with no way to make ends meet,

her voice is there to comfort me.

With two large fries from Sheetz,

one for now and one as needed,

you can forget about l’Orangerie

and picnic baskets along the Seine.

with Apollinaire and the Algerians,

with Jean Genet and Paul Verlaine.

Ken Fifer‘s poetry collections include After Fire (March Street Press) and Falling Man (Ithaca House). His poems have appeared in Philadelphia Stories, Barrow Street, Epoch, New Letters, Ploughshares, and The Literary Review. He has a Ph.D. in English Language and Literature from The University of Michigan.