Once upon a time, in a land that is not as far away as it seems, there was the Kingdom of Cramalot. Cramalot was ruled by King Sinderon the Strong. In the city of Monolinth, the capital of Cramalot, there lived a young squire named Marcdalf. Marcdalf was the squire of Sir Renald Shiningsword, who was a knight of the Octagon Table: a group of seven of King Sinderon’s most trusted knights. “One day,” said Sir Renald as Marcdalf helped him into his armor. “You will become a knight and replace me when I step down from my place at the Octagon Table.” This was an encouraging thought to Marcdalf, but he needed to train in order to become a knight.

One day, as Marcdalf and the other squires were sword training in the castle courtyard, the King himself walked in! With him was a cloaked figure. The squires knelt when they saw the King was present. “You may rise,” said King Sinderon. “I would like to introduce the Math Queen to you. She is a traveler from distant lands, and is here to help further our Kingdom’s technology and knowledge. I was just showing her around. Carry on.”

That evening as Marcdalf was walking home, a strange light glowed from the windows of the tallest tower of the King’s keep.

Over the next month, Marcdalf noticed strange things happening in the city. Some people were getting sick. But this sickness caused numbers and symbols to appear on people’s skin. Marcdalf suspected the Math Queen had something to do with it, but no one believed him. So he took matters into his own hands. He climbed the steps to the tower.

When he reached the top he knocked on the door. No response. “Hello?” Marcdalf called. No answer. He tried the doorknob. It was unlocked. No going back now, thought Marcdalf. He opened the door. It opened with a slight “C-R-E-E-E-A-K…” Before him was a dark room. He drew his sword. In the dim light he could make out bookshelves lining the walls. In the center of the room there was a small table with a book on it. The book was opened, and numbers and symbols seemed to be floating out of it! The source of the sickness! thought Marcdalf.

“Well, well, well, it looks like you have seen too much,” a voice echoed throughout the tower. “We can’t have you telling anyone now, can we?” The Math Queen stepped out of the shadows, sword raised. There was a strange light in her eyes. Marcdalf leapt forward and shut the book! There was a blast that knocked them both to the ground!

As the smoke cleared, two guards walked into the room. “What happened? One of them asked Marcdalf.

“I came to investigate the sickness,” Marcdalf explained. “I think that book may have been the source. I closed it, and there was some sort of explosion.”

“Well, whatever you did worked,” said the other guard. “The sickness has disappeared!” The Math Queen rose to her feet. The strange glow was gone from her eyes. “Now what’s your story?” the guard asked her.

“I opened that book,” she said. “I don’t remember much after that.”

Marcdalf and the Math Queen were summoned by King Sinderon. He held the book before him. It was now bound in chains to ensure it was not opened. “This can only have come from one place,” he said. “The dark land of Math-dor.” He looked up, his face grave. “We are being attacked. We must fight back.”

“One does not simply walk into Math-dor,” said Sir Morgan Freeman, the King’s advisor and knight of the Octagon Table. “That land is filled with fouler things than just equations. They say the very air you breathe is toxic there. The math there does not sleep.”

Suddenly, a cry of: “To arms! The city is being attacked!” was heard. It was a terrible battle. Monsters, whose skin was covered with numbers and symbols, ruthlessly attacked the city. But in the end, the attackers took the city. The survivors had barricaded themselves inside the keep. It seemed all hope was lost. But there was a secret exit that only the King and the Knights of the Octagon Table knew of. King Sinderon approached his throne, pushed a hidden button on its side, and the throne slid away, revealing a staircase into the depths of the city!

Marcdalf walked beside Sir Morgan Freeman down a tunnel lit by torches. “This,” Sir Morgan Freeman said, “is the Chunnel. It was built long ago as an escape route for times of crisis such as this.” Soon, the tunnel ended at a cave in the Foresty Forest. It was here that the survivors set up camp. “There is a way to stop the attacks and reclaim Cramalot,” said Sir Morgan Freeman as they sat by the fire, eating a stew that they had made with ingredients from the forest. Everyone eagerly looked up at him. A gloom seemed to have lifted from the camp. “In this forest,” Sir Morgan Freeman explained, “is an ancient ruin that houses the Sword of Alevan-Fiften, which means “math’s end” in an ancient language. It is said that only the Hero of Cramalot can draw the sword from the stone it is set in. The hero, with this sword, can then defeat the Dark Lord Saxon, who commands the math monsters from the land of Math-dor.”

“Well then,” said King Sinderon, “tomorrow, we will go to this ruin.”

The next day, they trekked to the ruin. And there was the Sword of Alevan-Fiften! One by one the survivors of the attack on Cramalot tried to pull the sword out of the stone, but to no avail. All hope seemed to be lost. Every single person there had tried to pull the sword out, except for one: Marcdalf. He stepped up to the sword. He gripped the handle. His hands were sweating. And then he pulled.

With a sudden “SHWING” it came out! The sunlight glinted off of the gleaming sword. Everyone was amazed. And they were relieved, for the Hero had ended up being one of them! Hope was not lost!

So it was decided that Marcdalf would then set out to Math-dor. With him would go Sir Morgan Freeman, for he was very wise, a great warrior, and knew much about Math-dor. They traveled through plains, into woods, over mountains, and across rivers. Finally they made it to the dark land of Math-dor. It was barren and desolate. But there was a tower in the middle of Math-dor. “That is where the Dark Lord Saxon is,” said Sir Morgan Freeman to Marcdalf. They set off across the land to the tower.

They reached it and climbed to the top. There, was the Dark Lord Saxon himself! He stood, looking over the land, in armor and a dark cloak. In the center of the top of the tower there was a table with a book on it, just like the one in back in Cramalot. “I knew you were coming,” said the Dark Lord Saxon, not turning at first, but he knew they were there. He turned to look at them. “I see the book I planted in Cramalot was useful.” Indeed, when the Math Queen opened the book, Saxon got a hold on her. She really was a nice person after all. The Dark Lord Saxon used confusing math, not basic math.

“You will not defeat us!” shouted Marcdalf, drawing the Sword of Alevan-Fiften. Sir Morgan Freeman drew his sword. Saxon drew his sword as well. They engaged in an epic sword fight on the top of the tower. When Saxon turned his attention to Morgan Freeman, Marcdalf saw his chance. Saxon furiously attacked Morgan Freeman, but the knight blocked each blow. Marcdalf then grabbed the book and cut it in half with the sword! A blast of light shot from the tower. Saxon fell to his knees. He laughed.

“You may have defeated confusing math, but you have not won that easily!” Saxon said. Suddenly, the earth around them began to shake. There was a roar of thunder. Lighting shot down from the sky.

“Oh no!” Marcdalf shouted. “We haven’t only destroyed confusing math, but math itself!” You see, the world needs math.

“There must be some way to restore math!” Sir Morgan Freeman said. Then, Marcdalf saw it: a slot in the table where the book had been. He took the Sword of Alevan-Fiften and slid it into the table!

Somehow, the power of the sword restored math. The world went back to normal.

Later, there was a great ceremony in the King’s keep of the now reclaimed city of Cramalot. Marcdalf knelt before King Sinderon. “Today,” King Sinderon said. “We honor this hero who has saved our kingdom. He traveled far and fought bravely to save the land.” He drew his sword, and as he knighted Marcdalf, he said, “Today, I proclaim him: Sir Marcdalf the Valiant!”

End of Part I

M. G. Sherman is in the seventh grade at Tall Oaks Classical School in Delaware and likes creative writing, drawing and writing song lyrics. He also likes playing piano, running cross-country, and playing video games. He lives with his parents, older brother and rescue dog, Nydia, in Newark, Delaware. Some of his favorite books include The Hobbit, The Lord of the Rings trilogy, and The Hunger Game series. He is currently writing three novels and hopes to be a famous author before high school graduation. His disdain for math inspired this creative short story. 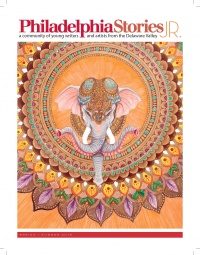