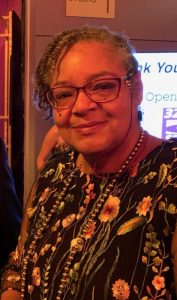 Diedre is someone who can handle anything, so Evelyn and I looked up when we heard her edge and saw her throw up her hands. Weaving elegantly past the tables and chairs in the undercroft, her kitten heels clicked on the hard linoleum as she announced, without even looking back at Brother Spaeth: “I don’t deal with dead people.”

Well after that Evelyn and I knew we had to stop what we were doing.

Each Sunday morning is the same. Evelyn, svelte and neat; not a hair of her salt-and-pepper pixie-cut out of place, was (as usual) methodically pouring orange juice, apple juice and cranberry juice into plastic cups.   Each juice-flavor selection on a separate, doily-lined tray, each cup about three-quarters full and lined up in uniform rows.  I stood next to her, a foot or so away, also looking out at the dining room from the church kitchen’s long rectangular serving window. I’m stout, my hair is styled in natural twisted locks  that fly- free especially my grey streak in the front;  I was (as usual) appropriately disheveled for someone working in a church kitchen before 8 in the morning.

Upstairs at St. Matthew AME Church they were praising the Lord and foot-stamping to the music. And I was trying to creatively line- up small boxes of Frosted Flakes, Frosted Mini-Wheats, Rice Krispies and Fruit Loops, next to Danishes in commercial cellophane and apple turnovers Saran-wrapped by hand and rearranging the blond cafeteria trays they sat on.  But now Evelyn and I both stopped and looked out at Diedre and Brother Spaeth and then at each other, silently craning our heads and knowing we were both thinking: “Did I just hear what I thought I heard?”

What’s more, it was Diedre and she can handle anything. Evelyn and I walked out of the kitchen in tandem to help, and there at a table near the center of the dining room sat a man with his head down. He was completely still—his back did not move up and down, he was apparently not breathing.  Evelyn poked him in the shoulder; there was no response.  I fingered his wrist and felt no pulse.

So what now? 100-plus people in church upstairs, most of them coming down to breakfast within the hour; biscuits and sausages in the oven, and a dead guy sprawled across a table in the middle of the room.

I volunteered to go upstairs and tell somebody.

I took a shortcut, ran up a back staircase and emerged at the side of the sanctuary. I can’t remember where they were in the service, but they were in full-church-passion mode and I decided to try to be discreet. Then it hit me: How do you break this news and to who?

I tapped one of the nurses, sitting at the end of a front-side pew near the Stewards, on the shoulder and said, Rena we have a situation – “A gentleman has apparently passed away downstairs.”

She looked at me like she’d never seen me before in her life. She said: “What?”

I whispered: We need you to come downstairs, one of the indigent people who come for breakfast, has apparently died in the undercroft. Rena had slipped out of her shoes – white nurse’s clogs – and she fumbled getting them back on her feet as she rose to rush downstairs behind me.

When we got downstairs the scene was unchanged: Diedre, Brother Spaeth and Evelyn standing over a slumped, disheveled, dirty-looking dead man.

“I don’t deal with throw-up.  You can ask my late husband,” said Evelyn.

As she walked to the kitchen to get a wet dishcloth.  Rena cautioned us not to touch his body-fluids. Since Evelyn and I were the only ones wearing gloves ‘cause we’d been working in the kitchen we realized for these initial moments we were it. I took the dish towel, noting that she’d picked a nice towel and taken the care to use warm water, as Evelyn crossed to the other side of the round table and started gathering up the plastic tablecloth.

I had the wet dish cloth under his chin as he finished spitting up and by the time I had folded it over to gently wipe his face, Diedre and Rena were putting on gloves and gathering up the tablecloth on either side. Brother Spaeth gave us an ETA on the EMTs and announced he would get a trash can.

Rena, who had to go back upstairs to get her pocketbook (and see about her mother) told us he might have hit his head and we should talk to him until the emergency services people came. So, I sat down next to the gentleman—he was middle-aged, balding, medium brown-skinned and not bad-looking with a freshly cleaned face.

So there we sat, in front of the partially bunched up tablecloth with the warm, damp dish towel folded and laid in front of him. (Just in case).

OK, now, what to say to someone you just thought was dead once we were past: “Let me help you… let’s clean up your chin a bit, there now…. Face to face now, I started: “And I’m Maida, what’s your name?”  He just stared at me under low eyelids and said, “usually people just leave me.” (When he passes out?) Usually?

I decided to try not to be condescending and make our required talk as conversational as possible, while cleverly, sneakily (I thought) checking his coherence.  I engaged, “So what did you do yesterday?” I asked as casually and politely as I could.

“What did you do yesterday,” he countered with an edge that surprised me. And I stuttered; at that moment I couldn’t remember yesterday.

Then he started asking me if I’d been to some church on Wednesday, or another church on Friday, or a different church on Saturday and gradually I realized he was telling me which churches gave away free food and which days I could go. And I started to see his sad, sad enterprise—a network, a traveling band of near-abandoned people walking from church-to- church all over West Philadelphia, looking for Christians willing to give strangers something to eat.

The EMTs came and I walked away. Brother Spaeth threw everything on the table away, Diedre wiped up with disinfectant and set out a clean tablecloth. Church ended, and the congregants came down to eat breakfast.

By the time Evelyn and I got back to the kitchen, someone had put the sausage patties in the biscuits and wrapped up the pork and turkey sandwiches, placing the piles next to the pastries and cereal creating the same food display everyone expects every week except first Sundays when we serve sage sausage, scrambled eggs, bacon, cheese grits and home fries.

Evelyn and I were back at our stations, food-prep time long past.  Indeed, we were nearly through serving our church family when a slightly familiar man walked through the line. Evelyn and I looked at each other, finally forming the words: “Was that?”

Diedre walked past, looked over at us and paused. “Yes, I know, “she said, her voice flat. “A resurrection and it wasn’t even Easter.”

Maida Cassandra Odom, a native of Akron, Ohio, is a longtime North Philadelphia resident and a member of St. Matthew AME Church in West Philadelphia. She retired in 2019 after working as a newspaper writer/reporter, a union activist/editor, and a journalism professor. Her church distributes free meals every Saturday.