We all know that animals can’t talk, right? Or can they? Have you ever found yourself having a conversation with your cat or dog, or another type of pet that you might own? In a way, your pet does talk to you, either through a look, a bark, a meow or whatever noise your particular pet may be able to make. I believe that  any people think their animals communicate with them without actually saying words. But what if animals could speak? What would they say? These are questions that have fired the imagination of writers for almost as long as there have been writers. Writer who have animals talk in their books and stories are using a literary technique called personification.

When I think of talking animals, two particular works come to mind: The Redwall books by Brian Jaques and Martha Speaks by Susan Meddaugh. I find the Redwall books interesting because, not only do the animals speak, they also have human characteristics. Some are good, some are bad.

Some are nice and some are mean, just like people. In the Martha books, I especially love the idea that Martha gains the ability to speak by eating alphabet soup. Children’s literature is filled with books and stories which use personification as a literary technique. But what about adult literature?

One of my favorite examples of personification in adult literature is a book called La Jument Vert, or The Green Pony. It was written by Marcel Ayme, a humorous French writer. The entire book is told from the point of view of a painting of a green pony that hangs on the wall in the living room of a French farmhouse. The pony tells us all about the family who lives in the farmhouse. Most of it is pretty embarrassing because the family doesn’t know the pony is watching them, and many of their family secrets are revealed. This particular novel also goes to show you that when using the technique of personification, it is not only animals that can tell a story. A painting can be the protagonist (or main character) of the story and give the main point of view. A tree could tell a story, or a rock, or even a cloud. When I was a kid I once wrote a story told from the point of view of a pair of sneakers. They had gotten separated in the locker room after gym class, and, alas, they despaired of ever finding each other again! I think it all worked out in the end, but really, I wrote it so long ago I can’t actually remember.

How about you? Have you ever written a story using personification? If you haven’t, you might want to give it a try. It can be a wonderful way to make your writing richer. If your pet were to tell a story, what story would it tell? How about the computer in your house? If it could report on what it sees every day, what would that tory be? Give it a try. Until next time, I wish you richer writing.

Teresa Sari FitzPatrick is a writer and board member of Philadelphia Stories, Jr. 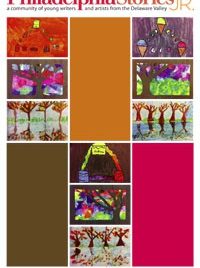