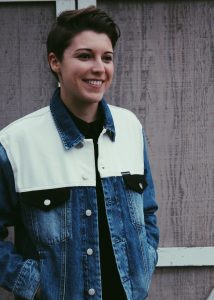 We leave the bar a little before midnight. The laughter of the drunken crowds outside muffles the car horns and screeching tires in the distance. The air is sticky as the group of us ramble down the sidewalk toward the nearest subway station, bumping into one another on every misstep. We’re all dressed in nineties garb to match the theme of the bar, to celebrate my twenty-fifth birthday, but now, out on the street, we’re conspicuous in our Chuck Taylors and choker necklaces.

As my friends joke and debate which direction to stumble toward, the lights atop the skyscrapers steal my eye. There’s something about Philadelphia at night that always seems so foreign. No matter how many times I’ve stared up at those same buildings in awe, it always feels like the first time. Yet somehow, it also feels like home. I’ve spent the last six months trying to distract myself with beauty like that of the skyline, trying to numb a gnawing pain, or at least dull it.

Ever since losing my cousin Chris, I’ve been stripped of the ability to be completely present in any given situation. He died of a drug overdose earlier in the year, leaving me with the overwhelming sense a piece of me is constantly missing—like I’ve lost an arm in an accident, like my leg has been sawed clean off. They say amputees often experience a condition called “phantom limb syndrome.” The condition can cause them to wake in the middle of the night in a panicked sweat, antagonized by a throbbing pain or confused by a sensation felt on a part of their body that no longer exists. I’ve been learning that the ghosts of the people we have loved and lost can generate a similar effect.

We reach a street corner and everyone agrees we need directions to the Patco. Otherwise, we may never catch a train to carry our tired bodies back over the bridge to Jersey. We pause as one of my friends rummages through her pockets in search of her phone.

With my neck craned and mouth agape, I trace the sharp edges of the high-rises cutting through the foggy night sky and block out the sound of my friends arguing over which way to go. I think of the Patco and it reminds me of the story I told when I gave my cousin’s eulogy. I was riding the train home from the Phillies parade in 2008, after they had just won the World Series. Someone across the aisle mentioned they were from Magnolia.

“Do you happen to know Chris Boone?” I asked, explaining who I was.

The excitement gleamed in their eyes as they shouted to their friends a couple rows back that I was “Boone’s cousin!” and before I knew it, the entire train car had erupted into applause, chanting his name. I think of that moment, of what kind of person you have to be to have people love you so much they cheer for you even when you’re not around. Then I think of all the other times he rode the Patco into Camden alone to score baggies of heroin and suddenly I am snapped back to reality.

“It’s 12:05!” my friend shouts, raising her phone in the air. The time shines bright on the screen. “You’re officially twenty-five!”

Everyone joins in her excitement, dancing and cheering like I’ve just hit the winning home run. Pedestrians are forced to detour around us as we claim the entire sidewalk in celebration. I laugh, and sit down on the yellow painted curb, hiding my face in my hands out of embarrassment as they begin to sing “Happy Birthday.”

When I was younger, it always felt awkward to have people sing to me on my birthday. My whole family would gather around a cake and turn out the lights, shushing each other as the candle flames illuminated my face. I hated being the center of attention or being expected to react some certain way as everyone harmonized and stared at me. But as time has passed, I’ve learned to treasure birthdays and holidays and any days where bliss hints of its pretty face.

For months, I’ve warned everyone about this particular birthday though, urging them to prepare for my “quarter life crisis.” And though it’s mostly a joke, the fear of getting older has been wrapping its calloused hands around my throat to remind me that every moment is fleeting. I can’t seem to stop myself from returning over and over again to the photo album that holds the memories of my very first birthday. My family threw me a party at my grandparents’ house. My cousin had just turned one a couple months earlier. In one picture, the two of us are wearing Sesame Street party hats and dazed looks on our faces as our parents hold us over the cake. Our tiny fingers are covered in icing and drool. The photos sharpen the phantom pain. They serve as faint reminders that my cousin, my partner in crime, my first best friend, will never get a twenty-fifth birthday, or any other birthdays for that matter. I won’t open my messages in the morning to find the same “Happy Birthday, I love you” text he sends each year, no matter how far we’ve grown apart. I’ll never get another chance to say the same to him; it leaves me with a throbbing sense of emptiness.

But here I am, on a corner in Philadelphia surrounded by buildings that continue to stand tall. Their lights reflect off one another’s windows creating a shine that’s impossible to ignore. Here I am surrounded by the people who continue to hold my hand as I navigate the ever-winding path of grief. I look up at them as they stand over me, singing. My wife’s eyes are gleeful and glazed over from one drink too many. A couple of my best friends sing theatrically, holding invisible microphones and clutching at their chests for dramatic effect. A friend who’s more like a brother laughs at the whole scene—a real, genuine laugh. The streetlight shines above them creating an orange glow in the thick city air around their heads. Just as they finish the final “Happy Birthday to you,” it begins to rain. No thunder or lightning, no torrential downpour, just rain—light enough to kiss my warm, June skin and let me know, it’s there.

Jackie Domenus is a queer writer and educator from South Jersey. Her essays have appeared in Watershed Review and Entropy. She recently received her MA in Writing from Rowan University and she serves as Associate Editor for Glassworks Magazine.