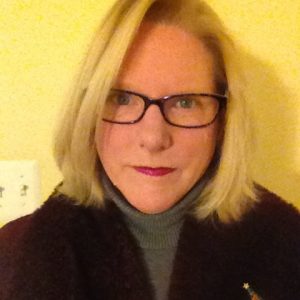 The vegetable rolled back and forth each time someone in search of food opened the bottom drawer, and after finding nothing but the eggplant, quickly closed the drawer again.

Knowing that a return trip to the grocery store to restock our fare would be irresponsible without cooking this sleek dark-purple vegetable, I resolved late on a Saturday evening to complete the task. This vegetable that no one would touch, this vegetable that refused to wilt or wither its way to the trash can, this vegetable that occupied too much space in the refrigerator drawer would become Eggplant Caviar, a dish that tastes better than any fish roe could match. I needed to make this leftover vegetable disappear.

The best pan for this task was the 16-inch frying pan buried in the back of my cabinet behind several more useful-sized pots and pans.

“Loud noise!” I called like a golfer who shouts “Fore!”  Then I squatted and pulled the rimmed pan by its handle from among its counterparts causing a clang and clatter that would have startled my 12-year-old son Nick when he was a toddler.

I set the heavy pan on the stovetop, grabbed a knife and dinner plate from the top cabinet, and set up my dicing station on the counter above the dishwasher.

Nick wandered into the kitchen.

“What are you cooking?” he asked, seeing the green pepper, onion and eggplant lined up for chopping.

“Eggplant Caviar,” I answered and pointed to the recipe. “It’s a dip to eat with crackers. I have whole-wheat sal-tynes, as you call them. And butter crackers.”

Back when my son was a little boy who mispronounced the word saltine, finding a way for him to assist me cooking a vegetable like eggplant was difficult. He stood on a chair to reach the countertop. Few jobs were appropriate. The risk of danger prohibited him from chopping vegetables with sharp utensils or working with heat over a hot stove. He was reduced to measuring and stirring ingredients into a bowl. To assert his authority over the task, he would add extra spices to the mix when I wasn’t looking.

Now he was on the verge of becoming a teen-ager, and we prepared dinner shoulder-to-shoulder in our sock feet. I still cut the vegetables while he mixed ingredients. But seemingly overnight, he had graduated from a bowl on the counter to a pan over the stove.

“Sure, you can help,” I said, relieved to pass the bulk of the chore on to somebody else. “Get ready for the vegetables.”

The green pepper was a rich forest green. Using a dull knife, because that’s all we own, I cut through the tough skin of the pepper to make thin strips, discarding the seeds and stem on top of a grocery bag on the counter. I then chopped the uneven strips into smaller pieces like confetti. With the same blunt tool, I scraped the chopped vegetable from the dinner plate into the pan where my son waited to begin cooking. I repeated the task with a medium onion, adding its discarded brown skins to the trash pile and the tiny-white nose-stinging squares into the pan.

My son added olive oil and garlic to the mix and increased the gas flames underneath the pan until the vegetables sizzled, turning pungent and raw into pleasant and sautéed.

Looking over his shoulder, I saw steam rising from the pan. I wanted to nudge Nick aside and take over, turn the heat down, and stir the mix to prevent the onions from burning. I was just about to step in when Nick adjusted the stove himself and added a slight flow of chicken broth to get the simmer under control.

“I got this, Mom,” he said, giving me no room to intervene.

Nick stirred vegetables with a plastic, ochre spatula at the stove while I tackled the awkward eggplant with my insufficient tool. The blade of my knife was too short for the task, but no other cutlery we owned could get the job done. I adjusted the knife’s position each time the blade slit into the vegetable but stuck, barred by the curb of the knife handle. Good-bye you plain, purple vegetable that’s been in our refrigerator forever.

After creating rings of eggplant stacked like pancakes on the side of the plate, I cut through the edges of each slice and delicately peeled away the black skin, careful to separate the tough peel from the spongy meat I wanted to keep and cook. After all of the skins were discarded, I lay the beige circles one at the time on the open side of the plate and began slicing each in a graph paper pattern, dropping the resulting squares of eggplant into the mixture being stirred by my son.

“What we need is some music,” he said, temporarily leaving his post to find a pop station on his red I-Pad touch that he placed on the counter, closer to the refrigerator than to the stove. We listened to a singer I had never heard before release his emotions and somehow – abracadabra – carry away my worries about the eggplant, too.

My child worked at the stove, and I erased final evidence that the raw eggplant ever existed. I threw away the grocery bag filled with the inedible vegetable scraps and wiped the counter with a paper towel after spraying the surface with cleaner. Lifting the kitchen faucet handle and nudging it few times to adjust the running water temperature from scorching to tolerable, I rinsed the dirty prep utensils and dishes and placed them one by one out of sight in the dishwasher.

“I’m going to add more olive oil,” Nick said as he worked behind me. “Do we have any hot sauce?”

“No, I need to add that to the grocery list,” I said, continuing to move dishes between the sink and dishwasher.

“But let me see what I can find,” I said, scanning the different spices on the shelf and reaching for a familiar choice. “How about red pepper flakes?”

While I rummaged through a utensil drawer to find a measuring spoon, he jumped ahead and started sprinkling the dried herb over the pan. He also freely added oregano and basil.

I went around the counter and sat on a stool. Nick continued to transform the eggplant into an incredible dish. He added canned tomatoes, Worcestershire sauce and more rogue spices. When he declared the recipe was ready to try, I opened the crackers. We both chose the butter-flavored and ignored the whole-wheat saltines.

We moved to the living room. Nick put down a yellow placemat on the coffee table and served the caviar in a pottery dish I usually reserved for company. He set the crackers between us and scooped a helping of the appetizer onto a plate for me to try first.

The caviar tasted nothing like eggplant. Its savory flavor and texture had just the right kick.

“Is this good or what?” he asked, putting another spoonful on his plate.

Then we sat at opposite ends of the worn, tan couch, each of us blankly putting dip on our crackers while watching a re-run detective show on TV, enjoying the caviar, and making the eggplant that wouldn’t go away disappear.

A former newspaper journalist, Caroline Kalfas writes in Woolwich Township, NJ. Her work has appeared in various newsletters and the 2018 and 2019 editions of Bay to Ocean: The Year’s Best Writing from the Eastern Shore Writers Association. She is a graduate of N.C. State University in Raleigh.