Devi: What inspired you to be a writer?

Jim: I think it’s because when I was a kid, I really liked to read, and I read all kinds of stuff.   I read good books, I read junky books, I read comics., I read equal quantities of stuff that was good for me, and I read garbage. I think that one might think, if you like it a lot, you’d like to write someday. Do you like to read?

Jim: See, that’s where writers come from. They start off when they’re younger.  They really like to read, and the next thing you know, they’re writing. You probably write too, right?

Jim: Yeah, ok, so one day, before you know it, someone will make something you wrote into a book.

Devi: What was your first story about?

Jim: The first thing I ever wrote? Well, I did a book a long time ago, a book of cartoons, that was called Dealing with The Idiots In Your Life. But that was mostly just cartoons, that wasn’t really a story; so, I guess the first one I did was a Franny K. Stein story.

Devi: What are three things you found funny as a kid, that you still find funny today?

Jim: Hmmm. Well, farts. Those were funny then, and they’re funny now; I’m pretty sure those stay funny forever. Probably babies make me laugh a lot.  When they try to eat or walk or stuff like that. Let’s see… farts…babies… oh! And when babies fart.

Devi: Were you ever afraid of the dark?

Jim: I had a weird thing that when I was afraid of the dark, I would sort of rush into it.   So, if I thought there was a monster in the basement, I’d have this weird tendency of running down after it. I think I just always thought that I could be scarier. I mean, it was my basement! I knew where everything was; I guess I always thought that I was the scariest thing in the dark.

Devi: What were you scared of as a kid?  Do you use that in stories that you write today?

Jim: See, the other thing is that I was born on Halloween. So, from my very first memories of birthdays, which are your happiest memories, it was all monsters and zombies and stuff like that. So, I never found that stuff really scary. I think I’m actually more scared of crazy, real people than monsters or ghosts or anything like that.

Devi: Do you ever draw pictures before writing the story?

Jim: Yes, sometimes I’ll draw something and the drawing will make me think of a story. Or, sometimes when I can’t think of what I want to do, I might draw it first. And, the next Franny story, the idea I had just started as a little drawing… So, yes, sometimes the drawings start it, and sometimes the writing starts it.

Devi: Which do you like better: drawing or writing?

Jim: If I had to pick, I would probably pick drawing; I’ve been drawing longer than I’ve been writing. And drawing, in lots of ways, is much easier than writing.

Devi: How did you learn to write stories and illustrate them?  Did you study or learn someplace special?

Jim: I think I just jumped in and started. It’s kind of something that you can’t do wrong, really. You just jump in and you start doing it, and if your editors want you to change something, they’ll tell you. One of these days, you might want to sell a story to a publisher, and what you shouldn’t get too hung up on are things like “how many pages should it be” and stuff like that, because the editors can see past all of that, and they can see past all the rough spots. They can see what’s brilliant in the story, what’s great about it. And they’ll help you bring it along.  They don’t necessarily expect you to walk in the door with something that’s done. So, I learned it just by jumping in.

Devi: Who are some people who encouraged you along the way?

Jim: I like PG Wodehouse.  He writes books about Edwardian England, and they’re really kind of stuffy but really funny.  I read scary books, too, like ones by Stephen King and Dean Koontz. And I read books about real things, like, The History of Salt, which sounds dumb, but you read about it from someone who knows what they’re talking about and its really fascinating. That teacher who I told you about in the 7th grade, she gave me one of the best pieces of advice that I ever had. She said “read books outside of your interests. Find books that look like you’ll hate them and read them anyways, because that’s how you discover things.  You might get 10 pages in and discover that you were right, you hate it, but sometimes you discover a writer or a topic that you didn’t even know you liked.

Devi: Franny knows a lot about what she likes but is awkward around other kids. Did you ever feel like her?

Jim: Ah no, I didn’t. I actually feel quite comfortable anyplace I am, which is also bad. So, the opposite of feeling shy or awkward- that’s me. So, if I walk into a room and I think I don’t belong with these people, I assume that they’re in the wrong room. And it’s just as weird and just as bad, but that’s what I have.

Devi: Why does Franny K. Stein seem not as happy around other people as she is around her dog?

Jim: It’s because Franny is really intensely focused on her science and her projects. And so her dog, Igor, just helps her. He doesn’t really get in the way.  He makes mistakes, but he’s trying. He’s just not as brilliant as Franny; his heart’s in the right place but his brain isn’t.

Devi: Why did you choose Franny K. Stein to be a mad scientist?

Jim: When my daughter was little, she only liked princesses and pretty ponies. What she really liked more were scary things and kooky, weird stuff. So, I wrote Franny for her. And like I said, being born on Halloween, all of these monsters were really friendly and familiar to me.

Devi: Did you want to be a mad scientist?

Jim: You know, I’m fascinated by science, and I think that all kids are sort of born scientists.  You’re born not knowing anything. And you spend most of your childhood running experiments, in order to learn things. Even babies are experimenting all the time. I think human beings are born scientists, myself included.

Devi: Is there an inspiration behind Franny or Viktor?

Jim: Well, Franny, like I mentioned, was for my daughter. Viktor, I wrote because there are so many characters out there of kids who are awkward and feel embarrassed all the time, or don’t have any confidence. So, I wanted to write a character that sees a lot different than that. And you can tell from reading Viktor that he believes he can do anything.

Devi: If Franny and Viktor ever met, how do you think that would go?

Jim: (Laughs) Well, let’s see. I think that they’d both think they were smarter than each other, and one of them would be right

Devi: In Dear Dumb Diary, why does Jamie Kelly hate science class? She is like the opposite of Franny K. Stein!

Jim: Jamie has deep feelings, but she kind of just blurts out anything she’s thinking because she’s writing in a diary. One day she might hate science and the next day she might love it. She just writes whatever she thinks.

Devi: Which was your most and least favorite subjects in school?

Jim: My least favorite, this is really easy for me, was math. I was really bad at it. You’re going to get to a point where you’ll do something called proofs.  You have to write down these equations, and then you have to go down the list and you have to prove why what you wrote is correct.  When I was in high school, once I got in trouble. My teacher was Mr. Van Draught, and he knew I hated math.  He said “Mr. Benton, would you please come up to the board and do the proof on this equation?” and I said “Mr. Van Draught, didn’t somebody prove this to you last year? How many times do we have to prove this to you before you just accept it?” Well, I got sent to the principal’s office.

My favorite classes were English and Art, which you could kind of guess.

Devi: If you could pick one character from your books, whom do you think is the most like you? 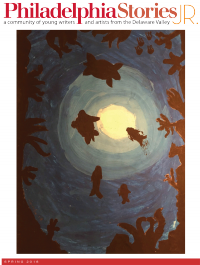