There are a lot of quiet towns like ours in the world, and a lot of them have nothing else to their name. Most towns have some sort of story, or legend, and so does ours. Behind the schoolhouse, past that little creek with the broken-down sign, there’s a dense verdant wood that opens it crackling oak arms. The story goes that little Jenny Lee tripped and fell back there so deep in the leaves and mud and rocks that nobody heard her screaming. So deep that when her body began to fall apart and split into leather and dust and marrow, the roots reached up from the earth and reclaimed her body, like Gaia taking back what was once hers. So deep that the crumbling pillars of bone still sit undisturbed, waiting for someone to come looking for little Jenny Lee.

Stories shift over time, and people get to talking. I’ve lived in this town for almost eighty years now, and the one thing that’s always been constant is that people get to talking. The stories always start on the playground, children urging each other in coarse whispers to avoid the man in the trees that killed Jenny Lee, then that the man is ten feet tall, and then that it was just an accident, and then back to the tall man again. Stories spread, sometimes the parents find out, sometimes the kids just grow up never hearing the real story and tell everyone their variation. I can hardly remember all these years later which way it was. Stories are like epidemics, they just spread and spread and never really stop.

Somehow or other, the story made it through the town, and to the townspeople, and soon enough all the people ever did was talk about what could have happened, and who could be the man, and that now, when they thought about it, they saw Mr. Brigsby lurking around the woods a few days before little Jenny disappeared. Soon Mr. Brigsby left town, and that was the last I ever heard of him. Once the story had really gained a little traction, I remember how the curfew was lowered to five o’clock sharp, and I remember those quick, frantic glances my parents cast when they ushered me in at night. I remember waking up late when the sheriff’s old car rolled up in front of our house, and I could hear Fats Domino’s voice crooning gently from his radio if only I cared to listen.

The story never really left the playground, just got shared and retold, and the children always talked about the man and about Jenny and about whether Mr. Brigsby only left town because everyone treated him a little different when the rumors began to spread. One child there, I can’t remember her name for the life of me, was held back a year and was in her final grade before going on to middle school. She was treated like a saint, because everyone thought she had to know everything about the disappearance, after all, she was there. But whenever they asked her, she would just smile knowingly and say she had no idea. Soon enough, playground rumor was that she was the killer, but that never panned out as much as poor old Mr. Brigsby.

No one ever really learned what happened to the girl, but every once in a blue moon someone would say that they were out in the woods, looking for a ball or shooting game, and they would see a little set of bones covered by thick woolly moss against a tree, but it’s not evidence that matters these days. All that matters now is the story, and that’s all that’s really left, anyway. Sometimes I get to thinking about how much fuller the town was then, before everyone left for the big cities or to be closer to family; nobody never really said that it was all because of the story.

Sometimes, I like to go down behind the schoolhouse, past that little creek with the broken-down sign, and just stare at the darkness behind the thick wet leaves. Anything could still be sitting back there: Jenny or Mr. Brigsby or the little girl who was held back a year, but I try not to let it bother me. I know I’m getting to be a relic of the town’s golden years, and these days, I’m just content to be down in that little spot, where all those years ago, I killed little Jenny Lee.

Gabriel Hanley is a freshman who enjoys drawing and writing. His favorite movie is Crouching Tiger Hidden Dragon. 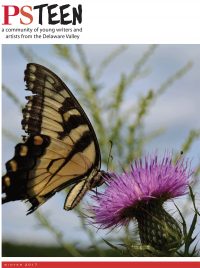