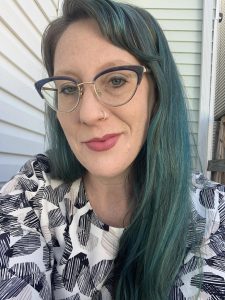 The baby bunny’s back again,

to reproduce without touch,

their white fur pure as the Mother.

When my husband hoses the garden,

it darts and hides behind a shovel, femoral

artery pulsing as I count the seconds.

“Attentiveness is the natural prayer

of the soul,” said some French philosopher.

braid your voice into my own.

Children chatter outside the frame.

In memory, the sun sits at a sixty-degree

reflecting and scattering the wavelengths.

When I called on the dream line

it wasn’t you really, hair too short

and a yellow blonde, but it felt good

to say I’m capable of growing too.

I see your black hollyhock, fruitful

while taking its time to become conscious.

I want to be the bunny held close

as you give the baby to another,

to lie in the blue of you.

Kelly Lorraine Andrews’ poems have appeared in Dream Pop Journal, Ghost Proposal, Ninth Letter, PANK, and Prick of the Spindle, among others. She is the author of five chapbooks, including Sonnets in Which the Speaker Is on Display (Stranded Oak Press, 2019), The Fear Archives (Two of Cups Press, 2017), and My Body Is a Poem I Can’t Stop Writing (Porkbelly Press, 2017). She received her MFA in poetry from the University of Pittsburgh. Along with her husband and two cats, she’s tending to her garden, trying to be tender to herself.