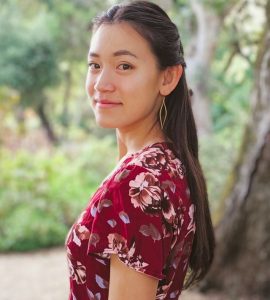 Ah is the first and easiest sound for a child to make,

Over the doctor’s popsicle-stick probe or at the kitchen table,

Entreaty for food to enter. Ah is the first spell we learn to sound out,

Invitation miraculously saying Take this space and give me something I

Understand in return. We practiced the other vowels like songs, even

Ü which sounds like the word for fish. The consonants, too, shone

Bright on their poster, de a horse’s hoof, te an umbrella handle, letters

Placed to form a chant, swelling into each other and crackling in our

Mouths. When a new student from China named John joined my

Described assignments to him while the class watched.

The public-ness mortified me. My classmates’ curiosity at sounds

Not theirs turned my speech into performance. Once, the teacher said “It’s

Like music to my ears” in class, amidst bongos and maracas. After that, I

Kicking out of my mouth before others could hear. I wanted to

Hide the sounds. Instead, I was forced to sing my strangeness aloud.

John bore the brunt of my shame, and I am still sorriest to him,

Quizzed for a year on assignments relayed mostly through anger. Drinking

Xifan at home, my parents asked about my new role translating for “the

Zhang classmate,” delighted I could make use of our language. I admit,

Chinese does chime like music. I couldn’t have deadened my

Shifting tones in that classroom if I’d wanted. We

Zither. So what if our speaking sounds like singing. We

Curved our mouths around the four tones as children for a reason.

Syllables gallop from my open mouth and John understands them.

Yes, learning language is a kind of incantation. We chant pinyin down a poster.

We say Ah hoping someone will understand and answer.

Stephanie Niu is the author of She Has Dreamt Again of Water, winner of the 2021 Diode Chapbook Prize. Her poems have appeared or are forthcoming in The Georgia Review, Southeast Review, Poets Readings the News, and Storm Cellar, as well as scientific collaborations including the 11th Annual St.Louis River Summit. She lives in New York City. Find her online at https://stephanieniu.com/poetry or on Twitter as @niusteph.