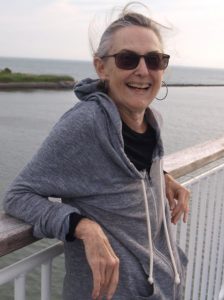 From here I promise you will see it all —

those clusters of towers

their various diameters and heights

grounded by a low plinth

grounded by marshes clotted with nests and lairs

where eels unscroll, abiding in the dark patches

on their way to the Sargasso Sea

not a sea as you’d imagine it, just

the ragged floating place they dream of —

a falling sequence of materials

from solid to liquid to gas, a game

grounded by a burning fall

torn caterwauling out of the ground

casting fire and steam into that floating sky

while within, the compression of life forms —

fern bones and beetle wings from long ago

transformed to gasoline and other gases, or lighter fuel

diesel laced with hydrogen, or propane —

in drifted tatters lapped by sky and water

toward some remembered place.

Anne Yarbrough’s work has appeared or is forthcoming in Poet Lore, Delmarva Review, and Gargoyle. She lives along the lower Delaware River.