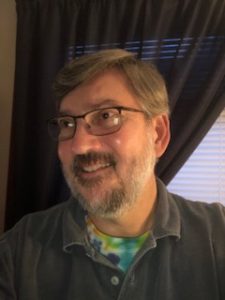 every fifteen minutes when its bark

sets off the strays in their chorus

of call and response and the supermarket

down the block has an alarm, too; it throbs

like a synthesizer overlay on an old disco track,

but the neighbors don’t dance except for

the young couple across the street who hustle

out on the stoop to the rhythm of their

raised voices, the angry tempo of go ahead

and do it, of big man, of bitch, while

its wheels on asphalt to hush its roll

through streetlights’ amber cone before the siren

song of the EMT’s carting someone in the truck

to the ER on the other side of town while neighbors

wish, maybe, that they were in one of the planes

saying, You know this is all bullshit, right?

before it screams down onto the runway

at the airport across the river – or perhaps it’s

the ringing they hear borne in the brief quiet

of their own bedrooms, the brazen scurry

of blood through their ears’ capillaries, the rattle

of breath only they can hear like a dream

they can’t quite rise from, a song almost recalled,

its ancient refrain on a loop they can’t shake,

in the mystery of sleep, awake, a puzzle, impossible,

like how, after all, day breaks without a sound.

Chris Ritter is a Philadelphia native living and working in a South Jersey suburb.