The wind blew, making the water ripple as her hair whipped her face. She watched as the water slowly engulfed the sun as it dipped below the clouds, now yellows and purples and all different shades of orange and pink. She sat still on the moss-coated rock as darkness fell around her. The sun, no longer visible, was much like the world around her, she thought to herself. Beautiful, but the water, as it reached for the last part of the sun in sight, was just like pollution. The world was becoming covered in trash, but she liked to think that much like how the sun was fully set, the pollution was at its worst. Much like how the sun would come back in the morning, pollution would get better soon. As people were sleeping in their beds, awareness was being raised about how the pollution was getting too bad, about how it was destroying the nature that kept them alive. Soon it would be better is what she liked to think. As the last bit of light disappeared, she began to walk home. Cold bit at her ankles and she looked down. A candy wrapper swirled around and landed at her feet. Soon, she thought. Soon.

Chaundra Furin-Campbell is a sixth grader at Masterman Middle School. 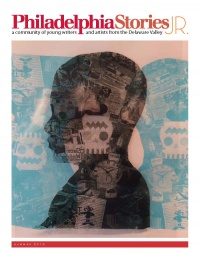