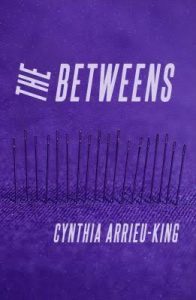 Cynthia Arrieu-King’s The Betweens is a startingly necessary book. The title refers to a needle in quilting that “you have to use… [that is] so thin and short that it can penetrate all of the layers… called a between.” (19). In fact, the entire collection of flash essays—or prose-poems, since Arrieu-King is also a poet—is dedicated to “those who find themselves in between.”

Arrieu-King’s speaker situates herself amid layers in many areas of her life: as a half-French, half-Chinese daughter in a family of brothers, as a teacher, as an artist. Arrieu-King’s fierce commitment to looking puts in this reviewer’s mind the classic image of the cow’s eye, cut open with a scalpel, from the early surrealist film Un Chien Andalou: she splits open her world defiantly, spilling the gory contents on the table. At the same time, the entire collection begins with an epigraph from Clutch Fleishmann, about moving away from metaphor because “one thing is never another thing, it’s a lie to say it is anything but itself.” It’s this tension of the unreal (living inside of a society that tells us over and over that those of us who defy categorization should not, in fact, exist) and her undeniable reality power this book. Although her poetic voice may be intimate—almost as if she is speaking into a small, soft space that echoes—the sweep of these essays is immense (as Gaston Bachelard might say).

In the second piece in the collection, she describes a dream when she was young with an intruder breaking into her house and trying to keep them out with her dollhouse. Later, “I dream about hiding in pianos, cupboards, floating up to the ceiling. I did not live through any wars… but these nightmares—in which I practice being invisible—feel inherited” (001). The impressive part of Arrieu-King’s work is that she manages not to be self-pitying. She realizes the privilege that was afforded to her in growing up “white-adjacent” and even how she “actually forget[s] I am Asian-looking” (025) when she is in elementary school. She writes about a grant application that is rejected because she is “hiding her privilege… [admitting,] I see what they mean.” (009).

Arrieu-King writes deftly of the “feeling of not wanting to be seen[, quoting her student who admits:] You get that displayed feeling from all the microagressions” (041). While not every micro-essay is about race, it is an elemental force in the world that she describes. So many of the works reverberate with a sense of expectation that others seem to have for her and how this speaker often fears she disappoints in an entire catalogue of ways. She recounts conversations with colleagues and friends when she feels ill-equipped to be the person they wish her to be. She does not spare herself. At times, however, these realizations are darkly funny, like when she admits she incorrectly assumed her Chinese father was quoting Confucius when she was growing up as he spouted quirky sayings. Years later she realizes that these are, in fact, quotes from Benjamin Franklin’s Poor Richard’s Almanac (023).

Frankly, this was a hard collection to read because I also identify as a multiracial Asian woman without a clear place. It may be difficult for any reader whose family has experienced displacement and trauma brought on by conflict and racism. But the beauty of The Betweens is that Arrieu-King models both the isolation and the freedom this affords us as we start over, resolve to thrive. She writes in the penultimate piece, when describing old friendship, that it is “…[a]s if the universe is telling me it’s right to keep choosing people that feel like home” (069). Each of these works is a quilt-square in an intricate tapestry of honesty and forged identity. Arrieu-King has artfully staked a claim on the needle-point of so many important conversations happening right now.