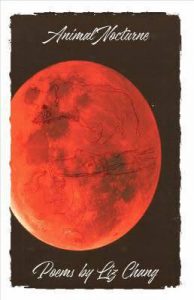 Liz Chang’s chapbook Animal Nocturne (2017) explores the complexities of race, love, and motherhood through a style of poetry unique to the contemporary moment. In addition to her work on the editorial board here at Philadelphia Stories, Chang is an Associate Professor of English at Delaware County Community College, and she has published two books of poetry in addition to her chapbook. Her poems have also appeared in the Verse Daily Origins, Stoneboat Literary Journal, and the Schuylkill Valley Journal, among others. She was also the 2012 Montgomery County Poet Laureate.

Animal Nocturne’s fauna imagery stands out from the first poem, entitled “A Herd of Elephants is Sometimes Called a Memory,” which begins with a metaphor that suggests that truly knowing is, “a dappled elephant hide, / ancient pachyderm’s skin (1),” huge and comprehensive, with the ability to speak and understand, “so low / that only we can hear it.” In the last poem of the collection, “A Ceremonial Poem to Honor Improbable Events,” Chang describes the persistence of horseshoe crabs. She writes:

I was driving, thinking of love, the architecture of the universe

and this crab who has stubbornly bulldozed her way through

all six extinctions on this tired earth (22).

This comparison of love to the strength of a species to survive against all odds could easily slip into cliche, but Chang’s careful implication of the connection keeps the metaphor firmly out of that territory. The first section implies that in order to be able to survive those six extinctions, one must be able to give, to provide some eggs as food for birds.

Chang’s chapbook also deals with race, and passing that race onto one’s children.

In the poem, “What to Look for at the Dry Cleaners,” Change describes a moment where she recited a racist song that she had heard from school in front of her father. She then describes a scene where she called herself a racist name because a boy at school didn’t like her. She writes:

Daughter, I am telling you the names
I called myself so that you will hear them

and know that when politicians set off

using our heritage as code…

The gentle and kind workers (3).

This section details the ways in which microaggressions, and the childish forms of racism, become public policy and intentional, institutional oppression. The speaker in this poem is trying to avoid a layer of generational trauma of internalized racism appearing in their daughter, a feat that would seem too impossible if discussed in those big picture terms. So, Chang describes it as finding a love for the individuals of their heritage, who, of course, make up the whole of a culture.

This collection touches on motherhood in a more intimate light as well. In her poem, “The Truth of It,” she writes presumably of her daughter:

this world is laden with sorrow

and I cannot humanly shield her softest parts,

but here is beauty

and the pain it remakes.

The season of her grey eyes

The euphonious language of this section edges close to that of a lullaby, and the enjambment pulls the lines together almost as if the speaker is singing. The content is a tenet of parenthood, without once slipping into cliched or tired language.

Chang’s poetry is both uniquely refreshing and grounded in the traditions of 21st century craft, and Animal Nocturne is an honest and beautiful reflection of her experiences with aspects of her life that are deeply personal and wonderfully intimate.