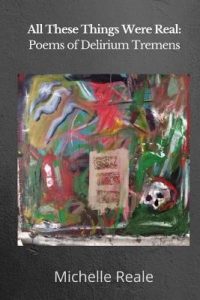 All These Things Were Real: Poems of Delirium Tremens by Michelle Reale is an intricate window into the life of a mother struggling through and with her son’s alcoholism, spending an unclear amount of time in hospitals, treatment centers, and pain. She begins the collection with the dictionary definition of Delirium Tremens, “a psychotic condition typical of withdrawal in chronic alcoholics” (6), effectively setting the tone for the coming meditation on emotional and familial affliction.

Reale is an associate professor at Arcadia University in Glenside, PA who has been nominated twice for a Pushcart Prize. Other collections by her include Season of Subtraction (Bordighera Press, 2019), Birds of Sicily (Aldrich Press, 2016), and Natural Habitat (Burning River, 2013), among others. She also conducts ethnographic work on African Immigrants in Sicily.

All These Things Were Real shines in its description of alcoholism from the outside. In a poem called “Crossing Borders”, Reale writes:

I could wallpaper a house

with receipts for Nikolai Vodka, for Rumpleminz

schnapps, one you can’t detect, the other could be

nothing more than assiduous oral hygiene. I want

Reale uses the image of creating wallpaper out of the receipts for the alcohol that is actively killing her son as a way to represent the need to act, to do something tangible with her pain. Wallpaper is used to cover, alter the situation in a person’s home, which is exactly what the speaker is trying, in a way that feels impossible, to do with her familial life. She later writes, in a poem entitled “Accusations” of the level of resentment her son has for her desire to heal and help him:

My son froths a verbal manifesto

Against my excessive mothering,

We don’t look at each other and

Implied in this section is her unspoken horror at the condition of her son, and the impossibility of helping someone who doesn’t yet understand that they need help.

Reale’s description of hospital rooms and staff is another aspect of this collection that cannot go unmentioned. In a poem entitled “ICU,” the speaker describes a scene where her son wants to give his medication to the art on the wall. Reale writes:

The nurse plays along in the loud, over-patient voice I’ve come to dread, because it means he’s not getting better. Meet my future wife, he says, as she has the gall to blush. More fake laughter. I am in the chair in the corner, overly warm in my winter coat, pulled around me like a fortress. I wear ICU delirium like a hairnet (18).

The scene has an eerie sense of normalcy to it: her readers can feel the uneasiness of the speaker, and they can see the grandeur of the dying man in the hospital bed as he denies his illness. The constant, ignored presence of the speaker throughout the entire collection forces the reader to understand her perceived powerlessness, her lack of tangible ways to fix the alcoholism of her son. She can only be and watch, hidden in a coat that feels as protective as it does suffocating. In a poem entitled, “By Now”. Reale writes:

My lady-like grief has betrayed me.

I dab my heavily made-up eyes,

garish, in their seemingly callous denial of why I am here.

Today was a good day,

The nurse with the cigarette and coffee breath bellows,

I am silent, questioning

Her method of measurement, though admittedly

I am no nursing school graduate (25).

Here is another scene of grief shown through smiling, bright-faced nurses that the speaker can no longer trust. There’s a mention of other, more acceptable addictions in the coffee and the cigarettes, hinting again at the perceived untrustworthiness of the nurse, and the lack of clear outward emotion from the speaker show the repetitiveness of this scene as clearly as the diction Reale uses does.

All These Things Were Real: Poems of Delirium Tremens, is a collection of poetry for anyone with experience dealing with and loving those with addiction. By showing her care for and understanding of the ailing, Reale offers a sense of community to those that share her experience. Reale’s visceral imagery, perceived powerlessness, and quiet, desperate love, are just personal enough to be effective, and just resigned enough to be honest.