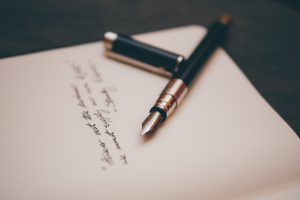 Sometimes we write poems to put words and names to things there aren’t words for. Poems are often a way we describe feelings that can’t easily be expressed any other way. Think of those common social media posts that begin with: TFW (that feeling when), which are then followed by some description of circumstances, such as TFW you’re so desperate for milk in your coffee that you start eyeing up the sour cream. (I hope no one’s ever that desperate).

Thinking of poems as TFW posts can help get you over the hump of that first line, that first image.

In fact, there’s a whole website, The Dictionary of Obscure Sorrows, devoted to naming feelings that didn’t previously have names. For example, wytai:  a feature of modern society that suddenly strikes you as absurd and grotesque—like zoos, milk-drinking or life insurance.

Here are two ways you can use the idea of unnamed feelings in poems.

First, try a poem based on the TFW (that feeling when) approach. Think of how you feel in a certain place, at a certain time, and write out the first line something like a Twitter post (you probably want to cut the line out of the draft later):

For example: TFW you reach a place in the woods where all traffic sounds disappear and all you hear are birds and your own footsteps.

Then describe it in the poem:

and it’s not so much the quiet you notice,

or the lack of trucks along the highway

heading out of state, but how loud the quiet

world is, how much the sparrows have to say

to the woodpeckers, what the chipmunks mean

when they shake their tails in dry leaves,

and when you close your eyes even the sun

scratching through the trees to finger your shoulder

seems to be saying something you needed to hear

today, of all days, especially.

Second (or first–there’s no wrong order to this), choose a word from the Dictionary of Obscure Sorrows and try to write a poem based on the definition. Describe the scene where that feeling takes place, what it does to your body, how the world looks and smells while you’re experiencing it.

Or, you could invent a new word for that feeling. For the poem above I combined the Latin word for silent (tacet) with the German word for cacophony (kakophonie) and came up with Tacetokophonie, which I think is what I’ll call that poem if I ever finish it.

Grant Clauser is the author of five books including Muddy Dragon on the Road to Heaven (winner of the Codhill Press Poetry Prize), Reckless Constellations, and The Magicians Handbook. His poems have appeared in The American Poetry Review, Cortland Review, Tar River Poetry, The Literary Review and others. He works as an editor and teaches at Rosemont College.