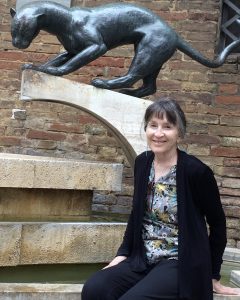 Shelly’s fiancé. Dirk. What kind of name is that? Stanley’s hand twitches. A horsefly bumps against the screen. Dirk’s smooth. Maybe too smooth. Knocks back Scotch like it’s water. Cocky. Ok, so was Stanley back in the day. But there’s something else that he can’t put his finger on. Dirk’s parents—they’re decent enough. They can be pain-in-the-ass-yacht-club snooty. But they’ve got the yacht, they’ve got the yacht.

And yeah, isn’t that what he wanted for her, putting in 70 + hours building his business to give her the best? Even returning to the ring when cash was low. Nearly got himself killed. He’d do it again. You’d better believe it. Sent her to Germantown Friends when the neighbor kids went to Northeast. The pricey business college for girls up in Rhode Island. His Shelly won’t marry no bum with a busted-up face and scarred hands. A guy who stinks of diesel fuel, fingernails black with chassis grease. Find someone with smarts and money, he told her. In that order? She asked, and he said, Nah, and they both laughed. Hell. But Dirk? Stanley could ask Marlene to talk to her but planning the wedding has helped ease that stepmother thing. It’s nice when they laugh together.

Sometimes he just wants to lock Shelly in her room. She’s been turning men’s heads since she was twelve. She’s got her mother’s sparkle. Those blue eyes wide as the ocean. Every guy was in love with Julie. Even after she got sick. Docs falling all over themselves for that high-beam smile. The surgeon’s face when he realized Stanley was Julie’s husband! Like, how’d this lout land her? And Shelly introducing him last week to Dirk’s father, who looked from Stanley to her, Stanley to her. Like, how in the world does this happen?

Now it’ll be Dirk’s job to protect her. Dirk. Christ.

Maybe it’s just father-of-the-bride jitters, but Stanley finds himself back in that old nightmare. No one said, but part of him knew Julie was dying. He knew and he didn’t know. In his dream, he’s in the ring, but can’t see his opponent. There were just gloves. Huge. Black. Hammering hammering hammering. A hook to his jaw, corkscrew jab to his kidney. His footwork is shot to hell. He tries to twist away, but he’s locked in cement. Another hit to the kidney and he’s down. He’d piss blood for a week.

It’s been building all evening, each under-her-breath comment his mother makes at the rehearsal dinner fueling it, each complaint from his future mother-in-law with her purse-string lips, Shelly yoyoing between giggling and pouting, and that look his father gives him as they argue over who will sit where, that same old look no matter how hard he works, how smart, the old fucker’s never satisfied, he could sell a million boats, load each one with every option in the book, it will never be enough, he will never be enough, and it’s that sucker-punch look his father sneaks in every goddamn single time, and he never sees it coming–how does he never see it coming?–and after the bullshit about the bar tab, the tip, the centerpieces, his lack of a tie, to top it all off, there’s Shelly’s stupid stupid giggle when they go parking after the restaurant, and when he levers the car seat down, she starts whining she doesn’t want to have sex, It’s the night before our wedding, Dirk! and she rounds her big blue eyes and pushes his hand away and fuck! can’t he even get some relief. They’ve been screwing since their third date, and now she’s going all virgin on him? and when his fingers move further up her leg she slaps him, not even a play slap like she sometimes does, his cheek stings, dammit! and that’s it, he lets loose, fingers coiling into fists, he gives in to his rage, stoking it, pretending he is even drunker than he is, but his fists avoid her face and somewhere inside he recognizes he’s been moving towards this all along; it’s that cool calculation to avoid her face with his fists that shocks him, appalls him, makes him howl inside for who he once was, for who, until this moment, he might still have been.

Shelly waits until her parents’ bedroom darkens, then slips off her shoes, opens the door, moves through the dark living room where the cuckoo clock screams 2 A.M. and she stops on the stairs, realizing it’s the last night she’ll hear the clock at this hour and how sweet and sad this moment should be, but now it’s just lonely and awful and upstairs under the fluorescent bathroom light bruises bloom on her arms and ribs and she knows knows that her father will kill Dirk if he finds out and it’s this, this certainty, more than the white cake at the bakery, the white dress in her closet (thank god for its Victorian collar, the tapered lace sleeves that graze her fingertips), more than everyone waiting to watch her walk down the aisle, more than the shame if she backs out now, after all the decisions and preparations and checklists, the fights over flowers and the dessert table that makes it impossible and her legs shake as she sits on the toilet to pee, shake as she washes her hands, as she wipes the mascara and glimmer shadow from her eyes—how blue and startled they look, pink-rimmed like a rabbit’s (is that why Dirk calls her Bunny?) and she stares long and hard, wondering what he sees when he looks at her, wondering how they’ve lasted this long (he’s always had a temper, he’s screamed at her, put his fist through a wall inches from her face, once even pushed her but instantly his eyes filled with self-loathing, and she always knew it wasn’t her he was mad at, it was work, his dad, the guy who cut him out on the Boulevard, the barkeep who told him he’d had enough, it was never her he was mad at and how tender he was afterwards, his fingertips tentative, gentle, but tonight was different, it was everything and for the first time she was just another thing in that everything, and maybe she should have just slept with him or at least given him a hand-job, after all, why shouldn’t he expect something (how about a little sugar, Bunny?) to tide him over, but she can’t shake what she saw in his eyes, something calculating and cold, but what would she say, how would she explain (her father will kill him) and so she turns off the bathroom light, tiptoes to her bedroom, searches the bottom dresser drawer for her old baby doll pajamas, soft and thin with wear, the elastic loose, and she climbs into her childhood bed, the sheets smelling faintly of sunlight, listens to the murmur of traffic beyond the park, and waits for tomorrow.

Mary Rohrer-Dann is the author of Taking the Long Way Home (Kelsay Books, 2021) and La Scaffetta: Poems from the Foundling Drawer (Tempest Productions, Inc.) Additional work appears/is forthcoming in The Clackamas Review, Vestal Review, Third Wednesday, Rat’s Ass Review, Flash Fiction Magazine, Philadelphia Stories (issue 2!) and other venues. Although she has long lived in central PA, she is still a Philly girl at heart, and is finishing a collection of story-poems based on the Philadelphia neighborhood she grew up in.