The bartender interrupts her train of thought, asks her what she’d like
She whispers the words,
“A beer, please”
The bartender just laughs, slams the glass down in front of her
The first sip makes her wrinkle her nose in disgust
But mama said not to worry
She’d get used to the taste in no time

Soon enough, the man’s pulling her away from the cigarette smell and the blinking lights
Her morals fight him off
But her hands give in

She’s awakened by the sunlight of a new day
Looking around the empty motel room, she sees her clothes lying everywhere
And notices hundred dollar bills lying on the nightstand
She frantically tries to piece together the night

But mama said not to worry
Everyone remembers their first

Anna Zachwieja is a 10th grader at Haverford High School. Some of her interests include writing, baking, and dancing. This is her first published piece. 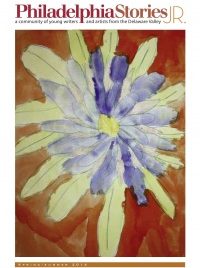