Eliana dashed through the forest and around the barren trees; thorns scratched at her legs. Her yellow rain boots splashed the puddles on the trail as she ran. Eliana put a hand on her dark, green hat as a big gust of wind whooshed past, nearly knocking her over.

A storm was coming and, in Foxtail Hollow, a storm was never a good sign. Every time there was a storm something horrible happened. The last time there had been a thunderstorm, three children in the village had disappeared.

But storm or not, she had to face it. This was just like in her dream: the storm… the forest… The Fox. She had to believe that it would all work out and she could face her fear and get her spell book back from The Fox.

Eliana stopped for a moment and picked up a short and sturdy branch with a pointed end, and then continued until she reached the end of the path. She stood in a clearing in the woods waiting for it. She clutched the sharp stick to her chest. She was ready.

“Fox! she called. “I know you’re there, come out!” Her words echoed all around her.

The dead trees beside her cast a shadow like a spiderweb against the cool dirt.

“I said come out!” she shouted, her breath clouding in front of her eyes.

Suddenly, she heard the crunching of leaves under foot. Eliana squinted against the dim light cast from the sinking sun. Then, she saw it.

“Ahhhh!” Eliana shrieked, her voice cutting through the silent air.

Eliana took a sharp breath in.

“But… but…” she stammered, staggering backwards until she hit the ground.

“You’re not The Fox!,” Eliana whispered, bewildered. Her chest tightened with panic.

The beast gave a cunning smile.

Then the beast let out a guttural cry into the twilight and a blanket of darkness covered the world.

Ada Busovsky is thirteen years old and loves to write novels and short stories. She has been writing since she was nine, and is currently working on a novel that she hopes to publish one day. She also enjoys baking and doing gymnastics. Foxtail Hollow is her first published piece of writing. 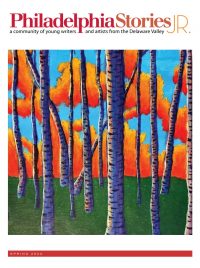