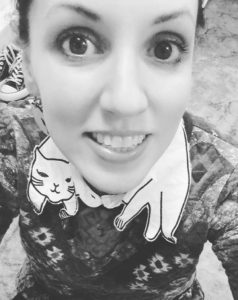 Philadelphia becomes a movie set when it rains. Neon slices through water droplets that crash against the dark street, tiny prisms spinning through the night. I’m watching film roll through my mind, filling my head with stories. I’m overwhelmed with flashing color and flickering movement.

I’m waiting for my life to take flight, everyday feeling as if I’m shooting the same scene over and over. But more immediately, I’m waiting for the number 57 bus, whose route looks like a four-year-old almost made the bus line straight, but whose hand on the ruler was bumped once, twice.

I’ve blended into the scenery on this damp corner, still and solitary against the telephone pole looming above me. There is no bus shelter. Instead I make myself small under an umbrella decorated with images of dancing ladies. They swing their arms wide, carefree and twirling across the gentle arc of the fabric. I spin the umbrella, spin myself, and we are dancing together on the lonely city sidewalk.

It’s easy to lose myself when my surroundings look like a dystopian sci-fi movie. Bright signs are harsh in the deep gray of evening. The mist in the air catches the light, refracts through the night, breaks against the pavement.

The bus crests the hill and approaches. I step off the sidewalk, over the rill of sludge sliding southward in the vee of where the curb meets street. The bus exhales as it stops, the doors folding in on themselves as the driver reaches and presses the button to kneel the front tire. It beeps in five quick chirps, but I’m already on the bus before the second beep. The two tones that verify payment follow me as I sidestep a walker and seek a seat. The aisle is slick, and I expect that the bus leaks. I touch the seat before I sit. You can’t always see the wet spots. Moisture is camouflaged by the patterned fabric that stretches taught on the steel chair frames.

For a moment, I am caught up in wondering about the seat fabric, wondering at the satisfaction of the designer as they chose the pattern, the contentment of those first riders to sit upon the seats. The once royal blue background has small geometric diamonds of color that remind me of confetti. New, it must have celebrated friendship and travel, but now, worn and stained, brown and faded, it embodies SEPTA’s slogan We’re Getting There. The implication that We’re Not There Yet is both an entertaining gaffe and a reminder of SEPTA’s struggles.

Behind me, a man rummages through his belongings. He removes everything from his pack, one item by one item, carefully setting them out in a neat line across the back bench. He is a mess of arms looking for—and I assume by his frustrated continual mutterings, not finding—that for which he is searching. Suddenly he repacks with swift jilted movements. He bundles his bag against himself and hustles off the bus at the next corner. I watch him head down the block, and bet he’ll jump the same bus line in the opposite direction to return for whatever he is missing. I can’t help but feel a kinship for this scattered desperate man. I too am looking for something I’ve misplaced, only I can’t seem to remember what it is. I hope the best for him. I imagine him returning to the restaurant he works at and finding the check slid tucked into the pocket of his apron, or his phone lying on the counter. Or maybe he’s coming from the purple carpeted, golden draped basement of his spiritual guru, and forgotten the slip of paper where he wrote down the meaning of life. Something about a fish? Or maybe it was a wish?

On the bus, a motley group of city secondary is seated around me. We who ride the bus alone on a Saturday night. We are the left-behinds. We are the after-thoughts. No couples get on the bus as we ride. Ten, then twenty minutes. It’s a quiet night. Four, five, six more blocks pass before we add to our crew. The driver is all but invisible behind the partition that shields her from our sight. Her arm emerges to push the lever for the door to open, then pulls the door closed.

We riders are all urbanites who understand silence, and most importantly, how to space ourselves throughout the bus to remain apart together. I imagine the lives of my fellow riders, their comings and goings. I notice their belongings, their tired expressions, and their imagined stories make me melancholy. I turn my face to the window instead.

Through the reflected faces of my fellow passengers, I watch people outside who scurry in the rain, darting across streets from awning to awning. This part of town is busy, and a horde of people hunch inside the small dry domes of their umbrellas. Others stand under overhangs, prioritizing some body parts while sacrificing others to the rain. A group of young hip smokers hug themselves against the damp. They are without umbrellas, and they blink into the night as if willing the downpour to stop, then shift, huddle closer. The light catches on their bright pointed elbows, stark against the black of their clothing. Around them people step wide, jostling one another. On the sidewalk, there is only room for two small umbrellas to pass, and the constant negotiation for space is an urban ballet.
Such a flurry of movement, but I’m parted from all but the visual. My mind fills in the other senses: a note of cigarette smoke just under the city dampness, the shuffling of pedestrians, the crash and splash as traffic flies through puddles, the chill that makes you feel uncomfortable but alive. The umbrellas spring—a quick metal zing and click—as doors open and patrons alight into the night. The traffic light turns green and cars accelerate, pushing the water pooled by clogged drains in small arcs that splash upon the sidewalk and scatter everyone nearby.

Inside the bus, there is an overwhelming silence.

At the next light, the bus turns and I gather my things. I swing my leg out into the aisle, prepping for my departure. My thigh is hit with an icy droplet. I have found the leak that has moistened the seat next to me.

I step off the bus opening my umbrella in one perfectly graceful movement that would make Mary Poppins proud. I dally on the pavement, but in only a moment I reach my house. The movie magic breaks. I shake my umbrella on my stoop as I stand under the jam. Shake myself free of any lingering fantasy. I pass through my door. I am home.

Alyson Giantisco is lucky in cards and enjoys winning. She believes in gratitude, celebration, the Oxford comma, and creativity. Giantisco trained in design, and continues to make and show artwork. She lives, works, and plays in Philadelphia.