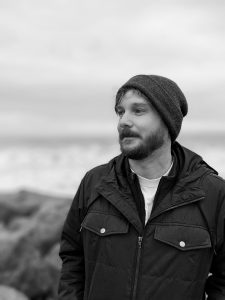 Man is the only creature that is not always killed when struck — all others are killed on the spot; nature doubtless bestows this honour on man because so many animals surpass him in strength. — Pliny the Elder

The talk-radio host is provoking listeners to weigh in on what language we believe acts as the official discourse in hell. The host thinks it must be Latin, too many sins, he says, tented under Papal vestments, meaning too many thighs grazed behind the doors of countless sacristies for perdition to be voiced in any tongue other than that of its most zealous arbiters. The callers, on the other hand, are sure it’s English, or Hebrew, or that demons speak all languages, or none, because suffering existed before language, which to me seems the strongest argument, as I shift my car into park up the block from the warehouse you let slip was your last work delivery, last obligation, when you called to say goodbye (a contraction of “God be with ye”). I keep the engine running like Kojak or Columbo, watch you over my trash-strewn dashboard as you load boxes onto a hand truck. I will follow you, stop whatever crime you’re planning against yourself, because I know you’re asking for a savior. On the radio, another long-time listener shares that the word “suffering” comes from Vulgar Latin, a variant of “sufferer,” meaning to “endure,” or to “carry,” and for a moment I resent you. But then I see your truck bumping down the rutted warehouse drive, and I swing into traffic behind you. I keep at least two car-lengths between us. As we twist through rush-hour, the topic has turned from Hell to Heaven. The host believes we have no need for language in the afterlife because God is complete understanding. And while I agree that there’s comfort to be found hiding under the blanket of omniscience, it still makes me want to call in and remind everyone that awareness, God’s or our own, is essential to our suffering. Without it we wouldn’t know we’ve been abandoned. God couldn’t get angry. There’d be no Hell, no reason for it, or for any of our actions, and as the great TV detectives teach us: motive is everything. You jam a quick right, screech your van into a supermarket plaza, and I’m thinking, good, if you want groceries, it means you don’t want to die. Still, I shadow you into the store and calculate our surprise meeting among the vegetables, perform my shock at running into you like this, while you act as if you don’t know I’ve been tailing you since before we both ran that red light.

Keith Kopka is the recipient of the 2019 Tampa Review Prize for his collection of poems, Count Four (University of Tampa Press, 2020). He is also the author of the critical text, Asking a Shadow to Dance: An Introduction to the Practice of Poetry. He is the recipient of the International Award for Excellence from the Books, Publishing & Libraries Research Network, a Senior Editor at Narrative Magazine, and an Assistant Professor at Holy Family University.