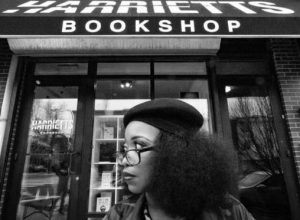 My Auntie Lilith is a storyteller adorned with all the histrionics a 5-foot Trinidadian woman can muster. As a child, visiting her home meant witnessing random flares of dramatic scares where, without warning, she’d turn out all of the lights, lock all of the doors, and provoke spirits as my sister, cousin, and me ran alongside her fighting evil in complete dread.

That eight-year-old me hid under her table in a puddle of my pee while my thirteen-year-old sister with tears on her cheeks locked herself in the closet and my cousins yelled in terror as my auntie’s unbridled jumbies and soucouyant and dwens chased us down the stairs and into varying corners of the house.

After a full night of panic, Auntie Lilith gathered us all at her feet for story time. Heaving breathlessly in the darkness of the house, she said, when she was my age, she fought off a mischievous haint that embodied a little boy named Seth. In her classroom, he’d walk past her desk and pull at her ponytails and call her a pickaninny, daily and without fail. Aunt Lilith knew that Seth was filled with an evil that only she could fend off. The notes she wrote to her teacher warning that a wicked energy dwelled in the classroom were unheeded and even mocked.

One day, as the wild and unchecked power hypnotized Seth, lil’ Aunt Lilith sharpened her pencil, fully intending to use it to pen yet another poetic prose of precaution. However, when Seth pulled his hand from her hair, placed it on her desk, and then bent down to whisper pickaninny inches from her lips, she knew it was her duty to exorcise the demon that ran rampant in Seth’s body. She stabbed her pencil straight through his skin, his nerves, his blood—scaring the hell out of him quite literally.

Today marks 147 days since Breonna Taylor was brutally murdered by her city (officers and officials), her state (her governor and her attorney general), and her country (her president and his administration). We, as taxpayers, play a part in her murder because we continue to pay the salaries of the people who murdered her. We also pay the salaries of the people who conspire to cover it up.

A good many of us have written think pieces and social media posts demanding justice, but, like my Aunt Lilith’s, our warnings are unheeded and even mocked. There is a wild and unchecked power that is running loose in our society. It continues, like Seth, to victimize and brutalize young, Black girls because it is drunk with power.

So continue writing your think pieces, telling your stories, and saying her name. But today, right now, sharpen your pencils and prepare to act boldly because this is an evil that we must fend off.

*The Writing for Social Justice column will appear quarterly in Philadelphia Stories.