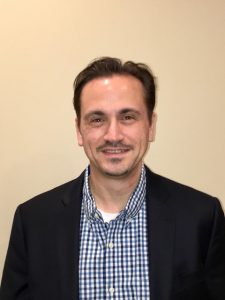 When my father remembers my mother has died,
when he realizes he had forgotten, and he cries
— if that’s the word for those great, wracking peals of thunder
I feel against me, holding the hollow tree
he has become as it waits to fall — he shudders
in the sudden storm of memory, and I know
I brought this down upon him,
the lightning bolt loosed from my callous hand.
I decided, then and there, I would never
speak of my mother again. I would lie
if he asked where she was. The dead die
again and again in their remembrance.
It is I who would kill her, the coward with my words.

But there is this: they are also reborn in the forgetting.
I become young again, the little boy he expects
when the nurse tells him I’m here, your son,
here to see you. Maybe he thinks to bounce me
up and down on his knee, a bronco I tried to,
but could never, tame. Up and down
goes time, rushing, fierce in its will to throw me.
But in that moment of his expectation, my mother is alive
and she is young and, oh my, so beautiful.
I never knew how beautiful she had been,
as she is again in his mind
when he hears the words Your son is here.
We are all young, and strong, and not even a little
bit broken. It’s why I lie.
It’s exactly what I wish I could see.

In addition to Philadelphia Stories, Joe’s poems have appeared in journals such as the Schuylkill Valley Journal, Philadelphia Poets, and Apiary. He was the Featured Poet for the Fall 2014 Edition of the SVJ, which has nominated two of Joe’s poems, “Light” and “Forsythia,” for the Pushcart Prize. Philadelphia Stories recently selected his poem, “Hospice,” for their 15th Anniversary Edition. Joe’s first book of poetry, Always in the Wrong Season, is available on Amazon.com.