It’s not the slant of the pitched ball,

the average dust on the bases,

the haphazard smile of the shortstop.

It’s not the pitcher’s skinned elbow,

the crooked cap on the coach,

the cat calls and bellows.

It’s not my daughter at third,

my son at second, deliberating the difference

between safe and sorry.

As always, the sun’s angle’s idyllic,

with the same tense glee,

whacks what intersects his path,

whacks it all the way to the edge

stalled forever, it seems, at half mast.

Professor of English at Lock Haven University, Marjorie Maddox has published 9 collections of poetry, 2 children’s books (including Rules of the Game: Baseball Poems) and over 450 poems, stories, and essays in journals and anthologies. Her most recent book, Local News from Someplace Else, focuses on living in an unsafe world. She is co-editor, with Jerry Wemple, of Common Wealth: Contemporary Poets on Pennsylvania and is the great grandniece of baseball legend Branch Rickey, who helped break the color barrier by signing Jackie Robinson. In addition to giving readings around the country, she has twice read at both the National Baseball Hall of Fame and the Little League World Series. For more info, see www.marjoriemaddox.com 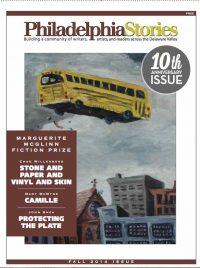