Oh, what a story,

one may expect to come true.

A doll sat up on the old, grandfather clock. It seemed to be staring down at the floor with glassy eyes begging to be on the ground. Lifeless eyes followed your every move and the silent beating of a heart that should have been still filled the room.

A man stood in a dimly lit room, sewing. He would make his creation come to life. Lifeless eyes would become real; a still heart would once again beat. The man sang a small

song as he worked, humming a made up tune.

A doll sits on that clock

and one more heart.

The clock chimed twelve: ding, dong, ding, dong in twelve successive strikes. But he didn’t stop. He didn’t have any care for time, for the only thing on his mind was his creation. Soon, another hour passed and the clock chimed one. The man put down his needle and thread, taking in a deep breath of air.

“Finished!” he exclaimed, holding up his creation for his other servants to see.

Glassy eyes, a stitched smile, and the echo of a heartbeat were his definition of perfection. He set his creation down and waited. One, two, three… His breaths came in rapid succession; his most perfect creation was about to come to life, and come to life she did. She creaked and jittered before standing up with a robotic motion. Perfect.

He gave the girl a smile – a wicked, wicked smile.


“Welcome home, dear princess. You may call me the Puppet Master. Everything will be alright as long as you never grow up…”

It was all okay. He only took the children that were already living a dollhouse life. He had to get ready. The next one, the next target, he needed another. He needed a perfect prince for his perfect princess.

The man donned his hat over his mop of black hair. He brought the brim down over his sharp, green eyes. He then shrugged on his coat. A black coat, blacker than the night, reached past his knees. And the last were his shoes. Pointy shoes with tassels adorned his feet, a color of emerald that matched his eyes.

He slipped outside, shutting the door behind him without a single sound. Creeping like a shadow, blending in perfectly with the dark he looked for an open window – the sign of yet another paper house. He quietly crept in, knowing that the child in his bed would be awake. He stood in front of the child’s bed, nothing of him visible except his emerald shoes. The child sat up, trembling with fear.


“Wh-who are you, Mister with the emerald shoes?”


The man just held a finger to the child’s lips. The child was alarmed – when had he moved? He then smiled at the child, a sweet, sickly smile that showed off his glistening teeth.

“Hush,” the man whispered in the child’s ear, and with that the child fell back on his bed, in an eternal sleep. He picked up the child, cradling the boy like a newborn baby. His new, little doll princess would get a perfect doll prince after all. Once again he blended in with the night, but this time holding a little boy in his arms.

The man arrived back at his house and set the boy down on the stone, cold table. The boy was pallid. His pallor pale, veins sticking out, everything about him screamed DEATH. But the man would not accept this, no. He did not kill; he merely preserved. He preserved innocence and youth, saving children from homes they did not wish to be in – paper houses, doll houses, paper families, doll families.

He finally began his operation. A light tune started playing:

you don’t need to struggle.

Pain will soon change to pleasure.

When your body has been torn apart,

memories will fade into pain.

First, he picked up the knife. The knife glinted in the dimly lit room, but it wasn’t any knife, no. It was a surgeon’s knife, an artist’s knife, a knife used for procedure; one that was used to form art. The man ran the knife across the boy’s naked torso, letting the crimson roses bloom across his body. The blood drained into a bucket. He then put the knife down and grabbed a needle and thread, stitching the boy’s wounds up. But he didn’t stop there; he continued stitching while humming a little tune:

After putting the needle and thread away, the man clapped his hands together with excitement; his eyes were sparkling brighter than any gem. Taking out a pallet and a paintbrush, he once again went back to work. Paying no attention to the time, he let the grandfather clock chime on. Tick, tock…Ding, dong! With a flurry of hand movements and timed strokes of the brush, he was done. He had created the perfect prince for his perfect princess.

The boy had a light blush on his cheeks and his skin was given a golden hue. His eyes had been painted over with an even more startling blue. But most importantly – the finishing touch – a symbol on the boy’s left palm, a symbol of ownership that would remain forever. Adorning the boy’s left palm was a feather, a red feather.

The man put the boy down and waited. One, Two, Three… The other dolls also watched in anticipation. The boy creaked and jittered, much like the girl before him had. Once again, the echo of a still heart’s beating filled the room. The man gave the boy a smile – a wicked, wicked smile.

“Welcome home, dear prince. You may call me the Puppet Master. Everything will be alright, just as long as you never grow up…”

Pretty soon children started disappearing all across the country. The Puppet Master was the stuff of nightmares and everybody had heard about him. The man that crept in the shadows and kidnapped children. Nobody had ever gotten a glimpse of him, but the last cry of the children kidnapped was a clue turned legend.


“It’s the Mister with the emerald shoes!”

Diya Goyal is an eleventh grader at Eastern Regional High School who dreams of one day becoming an author and poet. She holds a passion for reading and writing, and absolutely adores the mystery genre. Although, she would not be able to answer if asked what her favorite book is. Goyal also loves to watercolor and sketch. 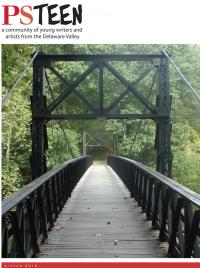