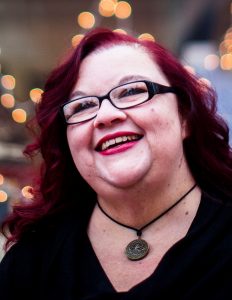 PHILADELPHIA, PA (March 2020) – Philadelphia Stories is thrilled to announce Kari Ann Ebert (left) as the winner of the 2020 Sandy Crimmins National Prize in Poetry. This year’s Crimmins Prize was judged by poet Iain Haley Pollock author of Ghost, like a Place (Alice James Books, 2018), which was nominated for an NAACP Image Award and for the Julie Suk Award, and Spit Back a Boy (University of Georgia Press, 2011), winner of the 2010 Cave Canem Poetry Prize. Ebert will be awarded $1000 for “Milk Sickness: A Mother Worries as Her Children Sleep.” Ebert and the runners up, honorable mentions, and editor’s choices will be celebrated in a reception following Philadelphia’s Push to Publish conference Saturday, October 10 at Rosemont College.

The winner of this year’s Crimmins Prize  winds itself in the conflicting but complementary threads of care and fear. Vigilance is exhausting but necessary, the poem seems to tell us. About the winning poem, Pollock writes:

We become “milk sick” when we drink milk from a cow that has grazed on poisonous plants.  In “Milk Sickness: A Mother Worries as Her Children Sleep,” Kari Ann Ebert makes this condition a metaphor for maternal apprehension.  The poison here is ophidian as snakes menace a pail of milk, “swim in sacrifice,” in that part of the body a mother gives up that her children might live.  As with many parents, having children has expanded the speaker’s capacity for love and also her capacity for fear.  Watching “noisy tumbles of coils & scales” in the milk pail trips an alarm in the speaker, induces a sense of hyper-vigilance in her.  She is sucked deeply into the snakes’ “dreamscape of venom & froth,” into the toxic, disorienting world of fear.  As the speaker’s dread deepens, Ebert overlays a deft sonic network, heightening the poem’s emotions.  A serpentine sibilance amplifies the sense of menace while underneath this the poem hums—“maybe the milk’s a mirror / a mother-of-pearl shine”—with the insistence of worry.  In the end, the snakes’ movement and attendant noise become, as does fear, so encompassing that relief from them seems manufactured or illicit—“like stolen butter.”  All in all, with an expert command of sound and image, Ebert captures how fear, especially maternal fear, acts on us and threatens to overwhelm us in the “opaque” hours of our lives.

We are grateful to judge Iain Haley Pollock for his  attention and care with this selection. Many of the poems we sent him raise important questions and give voice to unsettled feelings. It is hard not to recognize the poems in this batch as representative of a broad and frustrated desire for comfort in what feels to be an increasingly chaotic world. Pollock says that, “[W]e live in an exciting, efflorescent time in the history of American poetry,” and we can see that flowering in the poems listed below. He continues:

Today, we poets are telling hard truths about the political situation, about our personal lives, and about the intersection of the two. These poems explore diverse subjects—the lonely offices of grief, the deterioration of our public discourse, the cruel legacies of our national history, the triumphant possibilities of migration, the wistful complications of eros, and the sustaining inheritances of family.  But no matter the subject the unflinching clarity of each poet’s vision and the precision of each poet’s images tap into a deep well of emotion.  The pleasures of these poems are not easy but lie in knowing that out there other humans wrestle to make sense of the intractable world around them and perhaps even find within it cause for hard-won celebration.

Our three runners up are Chad Frame for his poem “Feeding My Father Pudding While Watching Bonanza,” Kyle Carrozza for his poem “Lukens Steel, Coatesville, Pennsylvania,” and Lupita Eyde-Tucker for her poem “How to Ride a Train in the Andes.” The three runners up will each receive $250 for their poems and are invited to join us at the reading and reception following Push to Publish on October 10.

Philadelphia Stories thanks Joe Sullivan for his continued support of this contest and his enduring friendship with Philadelphia Stories. We also thank Nicole Mancuso, contest coordinator and assistant poetry editor who has been a solid and consistent force in the life of this magazine, especially its contests.  We thank  Yalonda Rice, managing editor, for her flexibility and patience in assembling the magazine. Mostly, we thank the poets who generously share their work with us and we encourage local writers to continue to do so.

We will celebrate our winners at a reception following Push to Publish presented by Philadelphia Stories at Rosemont College, Saturday October 10. This year’s Push to Publish will incorporate a series of LitLife workshops and panels discussing and reflecting on a variety of ideas related to the place of poetry in our lives and the world. We will celebrate the winning poets of the Crimmins contest and the new poet laureate of Montgomery County in an afternoon reception which will be free and open to the public.

WINNER OF THE 2020 SANDY CRIMMINS NATIONAL PRIZE IN POETRY

“How to Ride a Train in the Andes,” Lupita Eyde-Tucker (Palm Bay, FL)

“What a Mother Lays on Her Son,” Jane Miller (Wilmington, DE)

About the Sandy Crimmins Poetry Prize:
The ninth annual Sandy Crimmins National Poetry Prize is a national poetry contest made possible by the generous support of Joseph Sullivan. The prize is named for his late wife, who served on the Philadelphia Stories board from 2005 to 2007. Sandy was a poet who performed with musicians, dancers, and fire-eaters at bars, bookstores, and festivals. Her short stories and poems were published in a variety of journals, and her book, String Theory, was published by Plan B Press.
About Philadelphia Stories:
Philadelphia Stories is a nonprofit literary magazine that publishes literary fiction, poetry and art from Pennsylvania, New Jersey, and Delaware and distributes free of charge to a wide demographic throughout the region. Our mission is to develop a community of writers, artists and readers through the magazine, and through education programs, such as writer’s workshops, reading series, and other affordable professional development programs for emerging writers and artists. Philadelphia Stories celebrated its 10th Anniversary in 2014.