You better hope that you’re lucky
enough to die outside like a tick-ridden
raccoon, bloating and frozen in the first
week of March, lucky enough to be
casually murdered or mowed down
on a busy street by a hulking heap
of American steel, then they just might
tag and take you to the cold heart of the city
morgue where at least you could rest
like old plans for some benignly useful
city project in a tidy municipal drawer,
or you better hope your loved ones have
twenty-one-hundred bucks on them
when the ambulance arrives, futilely,
because if you happen to die inside
your family rowhome in the city
of brotherly fuck you and no one has
the cash on them to pay the undertaker
to come, they’ll leave you without
a second thought, lifeless and decaying
on your plaid couch, because after all
even when you are finally incapable
of doing anything, you better have
the money to grease the wheels of
America’s rust-bucket free-enterprise
shit-show of callousness, I got mine-
get yours, godblessamerica, too stupid
to get ourselves out of sad festering
state of pigheaded dysfunction or
you’re fucked for good. Capiche?

Sean Webb has received many honors for his work including fellowships from The Arizona Commission on the Arts and the Utah Arts Council. Most recently he was awarded the Passages North Neutrino prize, 1st place in the Gemini Magazine 2017 Poetry Open, and 2nd place in the 2017 Public Poetry contest. His chapbook, The Constant Parades, was selected by Afaa Weaver as a runner-up in the 2017 Moonstone Poetry chapbook competition. He is a graduate of the Iowa Writers Workshop and in 2005 he served as Poet Laureate of Montgomery County Pennsylvania. His work has appeared in dozens of publications including Prairie Schooner, North American Review, Nimrod, Mudfish, The Quarterly, The Seattle Review, Greensboro Review, and the anthology Frances and Clare in Poetry. 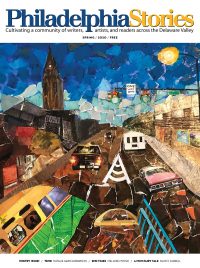