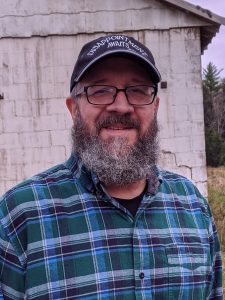 We have returned to see the lion, his human-like fingers
of stone gripping stone where he sits above the river
in the rain, high above us on a massive pedestal. Fall
colors are muted now but still beautiful against the gray.
The river is rising. Bright wet leaves stick to everything.
Our current distance between the dead can be measured
in the peculiar family names no longer heard of—
the Herknesses, the Spancs and Frinks, all folded
into other nomenclatures, other families persisting.
Colossal mausoleums anchor the familiar names—
Elkins, Widener, Lippincott. The die is cast so early
for some, there seems little variance, even over time.
Out over the river I see no evidence of living things.
What I think of living, movement over time. The river
is moving faster and becoming muddier as it rises.
Between headstones, we notice a flash of color—
a red fox with sprays of white on his chest and tail
loping over wet grass between stones and monuments.
He notices us but has little concern. Our distance is
insurmountable and we do not matter. Like everything
he is dead and not dead, living and not living as time only
seems to move. The still air in the empty spaces inside
the mausoleums do not support anything living. The illusion
of death persists. If it is an illusion to the dead, it is quite real
to the living, and not real, of course. I try to will my mind
to images of those underground in various states of decay
but I cannot. That reality is unknowable. Biocentrism postulates
that existence cannot suddenly become nonexistence.
(The pallor of death has left you and yet it is with us.)
Last night, we watched a fire on a large screen television.
A beautiful fire at the base of snowy mountains. Wind
whipped flames higher and we enjoyed it at a cellular level,
something deep in us connecting to ancient advents of survival.
We started noticing the points where the fire was revived
as it was digitally morphed to a return of the robust fire.
The fire was neither real nor without bounds, endlessly
looping for the hours it was created and we consumed it
with our eyes. And what do you make of the notion that
all this may just be a vast simulation? The possibility that all
of existence as we know it is something like a video game
created by greater beings. Maybe we are simply dream factories
firing up pre-programmed sequences of events. Just as the lion
was created to honor a General whose life spanned two centuries
and several wars in a time far removed from us and unfathomable.
The lion, though stately and august, has unmistakable fear in his eyes.
The sculptor could not help himself. Try as he might to create
a representative lion, he kept creating himself. The knuckles
that resemble exposed birch roots—his knuckles. The mouth
articulating awe and terror—his mouth. The tense haunches—
what he sees in his own legs. On our way back to the car,
hidden under a holly tree, surrounded by a manicured hedge,
we stumble across a remembrance in mosaic. Tiny bright tiles
that have been assembled to create a map of this exact location.
You would hardly notice it unless you just happen upon it,
or already know from some divine guidance that it is here.
We are walking past Millionaires row now, I imagine
straight lines leading up to mountains. Well planned grids
of cities laid out in valleys all around the world. Uniform
roads, regulated development, routines and codicils. There is
sense in the thoughts. Order in the musings. Civilization,
even at arm’s length, returning us to the rest of our lives.

Sean Webb says, “ I have received many honors for my work, including fellowships from the Arizona Commission on the Arts and the Utah Arts Council. Recent awards include the Passages North Neutrino Prize and I was the winner of the Gemini Magazine Poetry Open. My recent chapbooks include “The Constant Parades” and “What Cannot Stay Small Forever.” My work has appeared in many publications including Prairie Schooner, North American Review, The Quarterly, Seattle Review, West Branch, and Schuylkill Valley Journal.”