Doris Ferleger’s appropriately named new book Leavened speaks of the devotion of family. The book explores the familiar themes in Ferleger’s work of her and her family’s Jewish identity as survivors of the Holocaust. She does this through weaving recurring threads of ceremony, sacrifice and food. The collection’s title and its cover painting by writer and artist Natalie Goldberg contrast the adjective “leavened” against the rush of unleavened of Biblical significance. These elements speak to the time and attention Ferleger has given these characters, voices and stories. Each poem is a meditation that seems to resolutely set a new place at the table of the feast of her work.

The subject of survival is a familiar one, but these poems stun the reader with their sharpened craft and honesty. There are so many poems told in the voices of long-dead relatives that could have been overwrought, or worse, caricatures. Instead, Ferleger tempers every potentially sentimentalized story with starkly heartbreaking details. There is a powerful section in the first third of the book that explores the importance of different foods to two generations of family. The poems “Sitting on a Suitcase” (about an uncle guarding thousands of pieces of stale bread inside a suitcase instead of consuming them), “First Supper,” “Salt,” “Lucky” (about Momma licking salt from a train’s windows to survive), “Salami” and “Raspberry” (about confronting an aunt’s suicidal wish) form a masterful progression. Her lines, in “Inheritance,” describing Poppa’s lack of visible scars after the war, “unless you counted/his vigilant eyes, screams in the night/in his native tongue, though terror/sounds the same in any language” made this reviewer burst into tears.

Not every poem in this collection is sad. There are the poems in the latter half that reflect on the family’s current generation and the different productive ways that a brother and sister process their parents’ grief. Ferleger compares her family’s growth to Aspen roots cropping up in unexpected places. The final poems “Another Creation Story” and “Leavened” (of the title) are widely encompassing poems that, placed next to each other, are tinged with the losses and lessons she and her family have learned. They are the microscope and telescope of the collection. Ferleger’s unflinching treatment of these stories forces readers to see. There is a new refugee crisis today; especially in this time of mounting human suffering and need, this is a fiercely important book because it dares to show the smallest ways in which the world’s problems become the fears, fixations and hopes of one family. 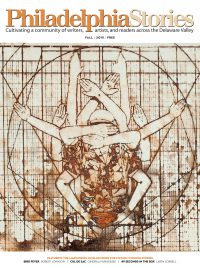