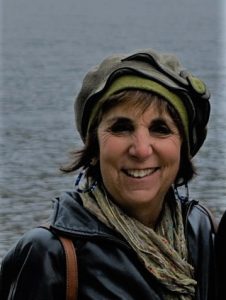 This, which is and is not for my mother.

This, which is and is not for the island of

Puerto Rico, which is America, which is, yes,

America which is not understood by too many Americans

To be America, paper towels flung at the heads of the bereft

Near drowned, after the hurricane passed through.

This, which is and is not about my mother

About an island crimson with bougainvillea,

Pale blue and breathless after storm, where

Once, long before paper towels were lobbed

Across a room of citizens by not-their- president-

Not-my-president, my mother nearly bled to

Death for no reason she would blame on

Puerto Rico.  Blame America, she once told me,

At the aquarium in Camden, my small granddaughters are mesmerized by the dance and drift of tentacled jellyfish, kites floating through a watery sky blue, through fluid air as if on one perfect day of enough.  Enough wind to raise the kites above the beach.  Enough stillness to keep them there.  Enough for me to watch my granddaughters’ rapt believing faces, reflections in the round window of the jellyfish tank, to guide their small hands into cold waters toward smooth-backed sting rays, surprisingly lumpy cold limbs of rust-tinged sea stars in the touching tank.  In this, I am become my mother.

This is about and not about Puerto Rico,

Not about and about my young, pregnant

Mother. This is about my friend Gerard,

Alive and furious.  This is about

Gerard, how he apologized to our collage

Class for his distraction, while we, a group of

Mothers, tried to reassure him, listened to

Dead air on his phone, tore and cut and glued.

I made my landscape under sea, serene: teal, yellow.

No screaming reds of bougainvillea.

She never learned to swim, my mother,

but she loved to walk along sand.

Transplant to salt-spray and waves,

she spent summer days picking up

teaching us to name the life by the husk:

on earth long before us, she instructed.

Once a storm blew starfish hoards to shore.

We carried plastic pails to the beach, could not

the hundreds left to dry.

Then one summer, she disappeared for at least a week from our island.  When she returned, she remained far away, pale, stayed out of the sun all day.   I picture her now, alone in the shuttered, cool house, how she must have replayed the way the air felt when she deplaned the small prop in Puerto Rico. I picture her hesitation before she entered, on a back street, a clinic where no one spoke English, the only language she had in which to ask for what she needed. Gray, dark, colorless in the memory she finally confessed to us so many years later. Outside, the moist hot air.  The unforgettable slashes of red bougainvillea,

I almost died.  So many years of silence before we finally heard the confusion—shame/fury—heard of the doctor, stateside, who refused to treat the ceaseless bleeding because of what I’d done.

Liz Abrams-Morley’s most recent collection, Beholder, was published by Word Poetry in April, 2018. Inventory, was published by Finishing Line Press in 2014 and Necessary Turns was published by Word Poetry in 2010 and won an Eric Hoffer Award for Excellence in Small Press Publishing that year. In 2020 she was named the Passager Poet in Passager Journal’s annual contest. Liz’s poems and short stories have been published in a variety of nationally distributed anthologies, journals and ezines, and have been read on NPR. A sometimes faculty member in the Rosemont College MFA program, Liz is co-founder of Around the Block Writers’ Collaborative (www.aroundtheblockwriters.org). Any given Tuesday at noontime (when not sheltering in) you can find her at the corner of 2nd and Chestnut directing her resistance toward the walls behind which her phantom Senator Pat Toomey may or may not be hiding from his constituents. A poet, professor, gramma and activist, Liz wades knee deep in the flow of everyday life from which she draws inspiration and, occasionally, exasperation. Please visit her on the web at www.lizabramsmorley.org.