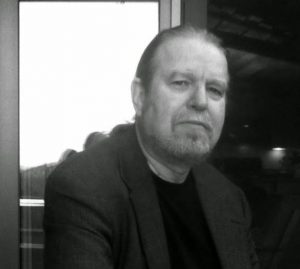 “This world is the other world too.”

ribboning into the depths, the casting

of a spindly Giacometti striding-figure.

Skeleton of music, of imagination, out

on a lawn I would keep trimmed religiously,

a caretaker sunburnt and weathered

in the name of Stillness – a stillness

that makes a case for inherent grace, that

reminds us how we move through this world,

a non-stop exchange of touch.

But which, if the ground begins to shake,

can be gripped as if embracing another ‘you’ –

the one you’re glad to see, the one who

runs next to your speeding train, taps your window,

then gives a little wave before peeling off, laughing,

toward the other world.

Steve Burke’s poems have been published in a number of journals & magazines; has had two chapbooks – After The Harvest & For Now – published by Moonstone Press. He worked for many years as an obstetric nurse; lives in the Mount Airy section of Philadelphia.