We forgot to water, we forgot to open the flue, so the living room quickly filled

with clouds, smoky gray, a locomotive engine had taken a wrong turn,

ending up against your parents’ figurines, gold frame caught in mid-undulation, draping over

the fireplace mirror,  bubbling milky-blue paint and the bar wheeled in for special occasions.

Sliding open to be washed by winter, we had years of thirsty African Violets, not dead yet.

I found you prone with a tiny angel, your hands folded to hold it.

reigning over that spring day 19 years before when there were orange-robed singing monks,

and smoke-damage was covered in grape vines painted,  roaming the room.

Sliding open to be washed by winter, we had years of thirsty African Violets, not dead yet.

to grab fistfuls, digging my nails into my numb palms, your dead ones already cool to the

touch.  Wading into wailing, all the while, picturing you up in blue and purple and orange

sliding open to be washed by winter, we had years of thirsty African Violets, not dead yet.

Julia Blumenreich is a poet and finishing her 19th year of teaching 4th grade at Germantown Academy in Fort Washington, PA.. A recipient of a Pennsylvania Arts Council grant for her poetry, she has read her work in various venues including the University of Pennsylvania, Brown University, and Muse House in Philadelphia. In 2012, she collaborated with the visual artist, Wendy Osterweil, on ‘Reforesting: An Homage to Gil Ott’ a poetry/ sculptural installation/print show at The Painted Bride Art Center. Four of her poems have been set to music composed by Kyle Smith and were performed as part of “Lyric Fest” in 2014. She’s published two chapbooks: Meeting Tessie (Singing Horse Press) and Artificial Memory (Leave Books) and has completed a poetry manuscript called “So You Wonder.” 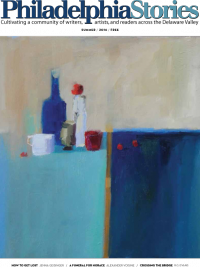