baby caterpillar curling itself along the sidewalk

in front of our homes, and before I take a second breath,

he lifts his miniature Nike and stamps the poor thing to goo,

spreads it from the bottom of his shoe to the curb, scraping

and scraping it away like Lady MacBeth unable to stop

washing her hands. But without her guilt. My horror is visceral

shaking a long finger. Then I recall summer nights

to run free till parents called us in for baths. How many

fireflies we caught those nights, dropping them into glass jars,

holes poked by the boys with an ice pick into the tin lids.

They were the lucky ones. Others we stripped of their

tiny lamps, lined them around our fingers—brilliant rings

turning us into lords and ladies, queens and kings.

Bernadette McBride, author of two poetry collections, is a three-time Pushcart Prize nominee, was a second-place winner of the international Ray Bradbury Writing Award, and a finalist for the Robert Fraser Poetry Prize. Her poems have appeared in the UK, numerous U.S. journals, and on PRIs The Writer’s Almanac with Garrison Keillor. She is poetry co-editor for the Schuylkill Valley Journal and was the 2009 Bucks County Poet Laureate. 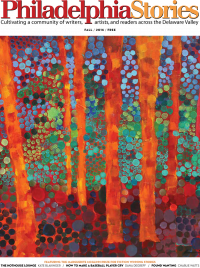